Round-up of News Stories on Witchcraft and the Occult 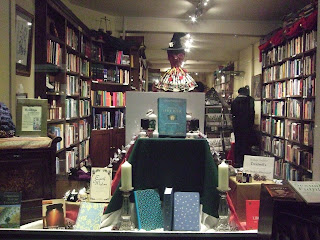 We are living in the Year of the Witch, according to the news. They are appearing in movies and TV programmes, there is a growing interest in the history of witchcraft and witch trials, and witches are also making themselves heard. Here is a round-up of recently published stories and features on that topic:

"Reading the occult" - a look at London's occult bookshops including Watkins, The Atlantis Bookshop and Treadwell's. Story at Boundless: https://unbound.com/boundless/2018/11/05/occult-bookshops/

"Here's Why This Witch Is Preparing For Midterm Elections By Hosting a Hex on Brett Kavanaugh" - story at TIME: http://time.com/5442528/brett-kavanaugh-hex/

"GLOBAL: The Witches of Baltimore - Young black women are leaving Christianity and embracing African witchcraft in digital covens." Story at The Atlantic: https://www.theatlantic.com/international/archive/2018/11/black-millennials-african-witchcraft-christianity/574393/

The photo at the top shows the interior of Treadwell's occult bookshop in London, viewed through its front window.
Posted by Badwitch at 08:00