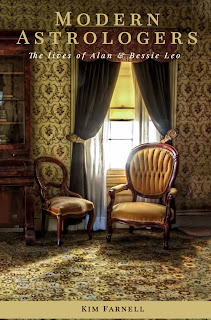 Modern Astrologers, by Kim Farnell, is a book I have been eagerly awaiting. It is about Alan Leo - probably the most influential astrologer of the early 20th century. What's more, my grandma worked for him in his London office. Here are some details about the book, written by its author, and short excerpts:

Almost everyone knows their star sign. And horoscope columns appear in almost all newspapers and women’s magazines. One man made this possible—in an era when practising astrology put you on the wrong side of the law.

Alan Leo was the first modern astrologer. He took an obscure, niche interest, re-packaged it, and placed it firmly at the centre of popular culture. His story is that of the other sort of Victorian—not the prudish and repressed empire builder, but one who mixed magic and science and rejected social mores in favour of creating a society where equality and universal brotherhood were the main themes.

Alan’s incorporation of concepts such as karma and reincarnation into astrology started the movement towards a more psychologically-oriented horoscope analysis. He was the first astrologer to argue for a loose interpretation of possible trends of experience rather than specific prediction of events, and his approach led to the birth of Sun sign astrology and popular horoscope columns. A pioneer of the practice of selling standardised birth chart interpretations, Leo also founded a number of astrological organisations, two of which continue to meet to the present day.

Throughout much of his life, Alan worked alongside his wife Bessie—this is her story, too.

Opening: In 1885 William Allan sat in a crowded waiting room. He’d never had much faith in doctors—they were expensive and he didn’t like the idea of taking prescribed drugs. And a few years earlier his jaundice had been resolved by the simple expedient of ingesting rosemary. However, it was comforting to listen to chatter about how clever the doctor was.

Finally, it was his turn. ‘How old are you?’ asked Dr Richardson without preamble. ‘Give me the place, time, and date of your birth.’

William waited while Dr Richardson consulted his books and then drew a map with figures on it. ‘You are suffering from kidney trouble, but will be quite well in about three weeks,’ the doctor said, handing William a herbal prescription. ‘Come back in a week.’

It wasn’t until William’s third visit that he summoned up enough courage to ask what his birth details had to do with his illness.

‘As I see by your map you can be trusted,’ said the doctor, ‘I will tell you. I study astrology.’ And he went on to explain what this meant, and how he found out by this means the treatment his patients required.

Fascinated, William listened closely. He was so absorbed that Dr Richardson asked him to come to tea on the following Sunday when he would show him how to cast a horoscope.

‘Was it not curious … that directly I heard the word “Astrology,”’ said William later, ‘I knew it, and knew that all I heard was true.’

Extract of chart reading: Chart prepared in 1901 for Daniel McCarthy, born in Garraunawarrig, Upper Townland, Cork (1 am, April 3rd, 1875) who moved to Minneapolis in 1893. At some point he was naturalised. He moved to Oakland, California before 1920 where he worked as a maths teacher. He married Gertrude (maiden name unknown) in about 1917—making Alan’s prediction below completely wrong. He had three children and died on 30 May 1974.

You have truly a remarkable horoscope and if you can carry the cross which in all probability you have you have placed upon your self – you will succeed in accomplishing this life what many would require 7 lives to perform.

If I may speak plainly to you for your own good I would advise you to be scrupulously careful with regard to speech.

You are apt at times to say more than you actually know, this will retard your progress and cause complications to arise, which will affect you in the unseen worlds

There is a very powerful text in the Voice of the Silence Light on the Path which says “Before the voice can speak in the presence of the Masters it must have lost the power to wound.” This should be your motto through life, for you need to take the sting out of some of your speech before you can impress those with whom you come into contact and give them the value of some of the depths of your nature.

You will realize this life much through the pairs of opposites.

By your physical conditions it is essential that you make practical that which is now only ideal.

Truth must be lived before it can be realized and the beauty of one’s own soul must be realized before true beauty can be appreciated.

You do not know the value of your own capabilities.

On the surface and externally you can display the best side of your nature, and are well able to conceal all that is undesirable and when you dip into yourself in an introspective manner you will find much waiting for you that requires clearing out. There is much more in your mind and your mental attitude towards things than is apparent until you put them to the most severe practical tests.

It is said that those whom the gods love, they chasten. You appear to have been chastened by some difficulties and handicaps and you have many more yet to undergo.

It is not wise to seek to avert them, but amidst it all, lose everything before you lose the determined spirit.

The basic quality of your natus is Intuition and reason.

Trust your own instincts and give your own soul a chance to whisper its commands to you – don’t let your brain be too active. s in Aries people—all—are too alert and are mentally too active. Stop thinking for a few minutes each day or wait and listen. You have 4 planets in fire signs therefore are devotional privately.

If you have not already studied the “Wisdom religion” for you it will indeed be light in darkness as it explains the why we are here and what we are here for!

The purpose of life and manifestation is the causes of the inequality of the human race. It sets forth the truth and only by the truth can any of us be set free.

You can view Modern Astrologers on Amazon.