Folklore: A Hagiography of Craft by Melusine Draco 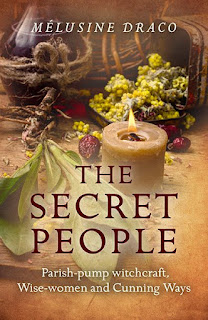 In this post, Melusine Draco talks about the background to two of her books: The Secret People and CRONE!, followed by an extract from The Secret People. A hagiography traditionally means writing about the lives of saints. Here it refers to those unrecognised saints - the wise women, cunning folk, traditional witches and practitioners of country crafts from bygone years. I'll be sharing part of CRONE! on A Bad Witch's Blog tomorrow:

There nothing more tiresome that biographical details of someone who is desperately trying to create a life of importance and yet when it came to writing The Secret People I found myself in the invidious position of recording memories of a country lifestyle that had almost disappeared when I was still a child. You might even say that I grew up surrounded by ghosts of the past – which was the perfect jumping-off point for where I am today! Although there have been those critics who claim those memories to be  romanticised’ … for example:

A few years ago, I attended a Welsh Game Fair with a group of friends. In the main arena, one of the attractions was a chap who was simulating all the old poacher’s tricks for the entertainment of the crowd. His display was cleverly contrived by using a series of elastic lures to make the fake ‘rabbits’ streak across the field into the long-net. It was so convincing that two visiting whippets joined in the fun, much to the delight of the crowd and the embarrassment of the owner. I’d been watching the display with a view to writing an article about it but instead of taking in the details of the here and now, my subconscious mind was re-living my own memories
of poaching that had been long forgotten.

Like Faust’s madeleines, it was the running of the long-net that triggered the memory. A long-net was some two foot high and some 20 feet long, and held up right by cut hazel sticks … how did I know they were hazel sticks? Because it had been my job to carry them. The story goes back to my pre-school years and my father left baby-sitting for reasons I can’t now remember. He’d done the 1940-45 stint in North Africa and Europe and it took a long, long time to get the need for an adrenalin buzz out of his system. Being a countryman, he turned his hand to a spot of DIY recreational therapy (i.e. poaching) because that was the way you coped in those pre-counselling days.

It was a fine night with a poacher’s moon; myself (aged about four) and the dog (about the same age) were bundled onto the motorbike and off we went into the darkness of the woods for a few hours of illegal hunting. This happened several times until my mother found out – then there was all hell to pay and my night-time excursions were stopped. Today, social services would consider leaving a four year old alone in the dark holding a poacher’s net, the act of extreme neglect, if not cruelty. For me, it represents ultimate trust in the person closest to me. The long-term effect is that I have no fear of being alone in remote places during the hours of darkness – which was just as well when I lived in Wales and used to roam about the fields at midnight with the dog, star-watching. Or where I live now in the Galtee Mountains. [Taken from Life-Writes – Compass Books]

The Secret People is my recollection of growing up in a rural environment where older people lived life that still relied on herbal preparations and ‘simples’ and poaching for the pot - and if that is classed as ‘romantic’ in some eyes then so be it. I feel myself privileged to have experienced a rapidly disappearing way of life, and damned lucky to be able to remember it … and in CRONE! to share many of those enduring memories that have accompanied me through life.

The Secret People is a wander down memory lane and a step back in time; it is that ‘other country’ of the past where parish-pump witches, wise women and cunning folk still travel the highways and byways of a bygone era. Their voices can still be heard in the recipes and remedies handed down via an oral tradition, and now giving new knowledge to the next generation of pagans. It was a world where men went out with a ferret in a box and a long-net, accompanied by a silent long dog for a companion under a ‘poacher’s moon’. From ‘owl-light’ until dawn these people walked silently in the woods and along the hedgerows, watching and waiting to collect Nature’s bounty to be used for the benefit of themselves and their neighbours. From them came the introduction to spells and charms, divination and fortune-telling; the language of birds and the movement of animals – all grist for the witch’s mill. Mysterious horsemen might share secrets of horseshoe nails and thunder-water; while countrymen lived by weather, the seedtime and the harvest.

Few of The Secret People could be called traditional witches by any stretch of the imagination, and many would have been mortally offended to be referred to as a ‘witch’ or ‘pagan’. Few parish-pump witches would have thought about the skills they possessed since these were natural abilities, and even fewer wise women and cunning folk would have had any concept of the sombre and often dangerous rituals required for the raising of energy needed in the practice of true witchcraft. Theirs was a knowledge that filtered down in the form of spells, domestic plant medicine and country lore, imparted to offspring, friends and neighbours, who in turn handed it down to their children ... and so on down through the generations. In fact, in his Dialogue Concerning Witches and Witchcraft (1603) George Gifford observed that local wise women ‘doth more good in one year than all these scripture men will do so long as they live’.

Most, however, would live by the Church calendar, inveigling saints to add potency to their healing spells, or to guide a hand in locating missing property; with many of the protective charms being aimed at deflecting malevolent witchcraft! Most old ladies in the parish seemed to have a wide repertoire of fortune-telling tricks to amuse young girls looking for a husband, not to mention the applied psychology of already knowing their neighbours’ business, which made divination with playing cards and tealeaves a push-over, and even up until recent years the village fete always had a fortune-telling tent. And since the early Church calendar had been formed around the agricultural year, the men folk of the village had no problem with presenting themselves, their animals, and produce from the harvest for blessing.

The Secret People would have greatly outnumbered the practitioners of traditional witchcraft since the practical abilities that define a true witch are bred in the bone and not everyone can lay claim to the lineage. The skills of The Secret People can, however, be learned and perfected with practise and for those who struggle to find a label with which to empathise, it is hoped the lessons taught here will help the reader to establish some sort of identity that sits comfortably with them. Today, under the ubiquitous umbrella of paganism, the parish-pump witch runs the occult shop in the high street, the wise woman dispenses Reiki healing and the cunning man has become a professional tarot reader. The countryman’s world has disappeared under a sprawl of urban housing and ring roads, while the poacher has yielded his domain to the brutal gangs who slaughter wildlife on a commercial scale – even the poacher’s dog, the lurcher, has found his niche in the ‘fly-ball’ event at Crufts!

And yet...the knowledge of The Secret People is still there for the learning, if only we know how
to search for it and rediscover our identity.

You can view The Secret People on Amazon. It is published by Moon Books.