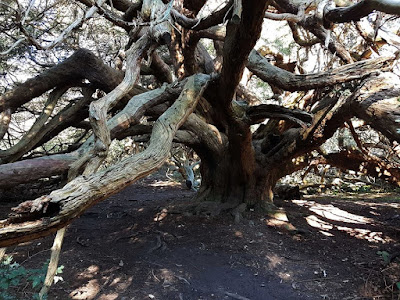 I was sent this amazing photo of an ancient yew tree in Kingley Vale by a reader of A Bad Witch's Blog, who asked not to be named.

Kingley Vale is an area of natural beauty in West Sussex, near the South Downs, and is now a nature reserve. It includes a grove of ancient yew trees that are possibly the oldest living things in England. Yews can live for hundreds - or maybe even thousands - of years. The area is steeped in folklore, particularly a tale that the yew grove is haunted by the ghosts of Viking marauders who were defeated there by people from nearby Chichester. Many witches associate yew trees with the Dark Goddess. Magically they represent death, but also healing and resurrection.

In the book The God Tree, author Janis Fry suggests many of the famous trees from mythology, including the Norse Yggdrasil, the Tree of Life in the Mesopotamian Epic of Gilgamesh and the tree in the Garden of Eden, were yew trees. She also says Druids, rather than worshipping in groves of oak trees, may have considered yews most sacred.

Near the yews at Kingley Vale are also the archaeological remains of a Romano-Celtic temple at Bow Hill, an Iron Age settlement called Goosehill Camp and Bronze Age round barrows known as the Devil's Humps.

I have never been to Kingley Vale, which is very remiss of me. This photo is a reminder that I really must go there myself.