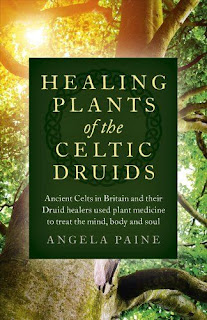 Here is an extract from Healing Plants of the Celtic Druids by Angela Paine. Angela said: "The Druids were the medicine men and women of the ancient Celts. My book covers a number of plants possibly used by the ancient Celts as medicine, to treat body, mind and soul."

Ronald Hutton said: “The Druids may well have been the most prominent magico-religious specialists of some of the peoples of north-western Europe just over a couple of thousand years ago.”

“They were,” he continued, “as sophisticated in their organisation as in their knowledge, having different divisions of expertise served by specialists with different names:” Bards, or poets; Ovates, who prophesied; and Druids, who were the priests, shamans, philosophers and judges, according to Greek and Roman writers.

“They had an annual meeting,” Ronald Hutton said, “in which Druids from all the different tribes of a particular region assembled to discuss matters of common interest.”

This echoes the annual meetings of the Pueblo people of New Mexico, which still occur today and which representatives of all the remaining tribes in the US attend. According to Julius Caesar the Druids virtually ruled Britain, since they were its lawmakers. Caesar said that Druids were concerned with “divine worship, the due performance of sacrifices, public and private and the interpretation of ritual questions.” He said that all the Druids recognised the authority of a single leader, who held the post for life. They carefully observed the natural world around them and performed religious ceremonies in the open for everyone to see, only retreating to the forests after the Roman invasion. Many people say that the Welsh poets are the heirs of the bards, preserving their traditions, which would account for the relatively high status of present day poets in Wales.

Although many believe that the Druids wore long, white robes, as described by Pliny, Sjoestedt describes the chief Druid of Ireland wearing a bull’s hide and a white speckled bird’s headdress with fluttering wings, a very shamanic description more in keeping with the shamanic role of the Druid. They communed with the spirit world, or ‘otherworld,’ gaining prophetic insights and valuable knowledge about the illness they had been asked to heal, according to John and Caitlin Matthews, just as the shamans of native peoples throughout the world still do today.

The ancient Celts believed that all aspects of the natural environment were possessed of spirit, including rocks, water, trees, animals, birds and fishes, and all belonged to the otherworld. Iron Age Britain (and probably Stone Age Britain) were numinous worlds, where everything was imbued with spirit, according to Aldhouse-Green. Every aspect of the natural world was precious to the ancient Celts and their Druids, especially trees and many of the forest trees were enchanted: the Willow, with her water-trailing branches and healing bark, the Yew with his seductive, dark, death-like enchantment, the Elder with her sweet blossoms filling the air with heady perfume, to lure men to the world of fairy, from thence never to return. It was a world where spirit was ever present, and nothing was quite as it seemed.

You can view The Healing Plants of Celtic Druids on Amazon. It is published by Moon Books.  I posted another extract from the book here.

Thank you for posting this, the book looks really interesting.
Norm.