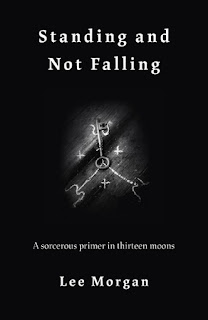 Here is an excerpt from a book called Standing and Not Falling: A Sorcerous Primer in Thirteen Moons by Lee Morgan:

When I speak to people about belief they are quick to assure me they already believe in magic. Why else would they be here in the first place, trying to learn it? In fact, enquiry about where their belief levels is often met with mild offence and at the very least, resistance. Belief relates back to the fundamentals of why we practise occultism at all, it asks of us big questions about the universe and it seems to demand of us some kind of answer. Yet it can be hard to be honest with others about belief, with many claiming a certainty that may in fact be exaggerated.

I think if we have to search for why people defend themselves and over-exaggerate their belief in magic when questioned I would say this reaches back to the fact our society is still largely Christian in mindset, in ways it’s only half aware of, and belief equated with faith, faith is equated with virtue. To not possess faith is to lack in virtue and the appropriate response to being told you lack virtue is shame. So to some, me asking them about their belief-levels is like questioning their virtue and state of belonging in the magic-practising community and seems like an attempt to shame them.

This is a way of thinking I believe needs shaking up considerably from the get-go. For a start, there are more shades of grey between belief and non-belief. Whilst I would agree that most people who actively seek out magical practice ‘believe’ in the potential for its efficacy to some degree, there are still a lot of stages of belief actualization that you watch a student pass through. You only have to witness the expression of disbelief and wonder on a person’s face when they witness their first semi-miraculous happening as the result of sorcery to know that you are seeing someone whose belief has just jumped up a notch.

Most people begin with a kind of provisional belief; as they have certain experiences that begin to build, their power as a sorcerer also grows. There are a few reasons for this, which I will return to later, but for now let’s just accept the connection between what I like to call ‘belief-belief’ (belief confirmed by experience) and increased ability to practise magic. We can experiment and prove the connection to ourselves later, for now let’s have a look at what creates blocks in this process.

Overwhelmingly, the people I meet who practise witchcraft or occultism of any stamp have a far above average education level and many of them the IQ to go along with it, something that due to failings in the school system they may or may not be aware of. Higher education means being exposed to a whole intellectual universe where scepticism is embedded in the language, formed by certain half-unspoken assumptions that the writer is speaking to a sceptical, scientific atheist.

Recently I was reading The Mind in the Cave: Consciousness and the Origins of Art by David Lewis-Williams. I was on my way home from an international trip where I had seen rock art from the Paleolithic in person and wanted to learn more. It might have been because I was reading on the plane, and in an exhausted and vulnerable state, but part of the way through the read I began to feel a subtle yet pervasive sensation akin to a mild magical attack. It had been invisible to me during the days of my university education, being immersed as I had been in the language of scepticism. But having spent some time writing in isolation, what had been an invisible force suddenly became something I was conscious of.

I found myself feeling very aware of the author’s utter assumption of cultural superiority over anyone who engages in ‘magical thinking’ including our ancestors and peoples around the world who still live traditionally. It was so clear that he had not gone out to find any possible explanation for the phenomenon he was looking at, he had gone out to find one that fitted with the leading assumptions of academia as an institution. There were certain possible conclusions that were off the table from the get-go and yet the premise that led to them was neither exposed nor explored.

In Graham Hancock’s treatment of similar subject matter in Supernatural he puts forward a radical proposition: what if the simplest explanation for the belief in every culture around the world, prior to our own, about interaction with spirits is that people are telling the truth as they experienced it? So rather than assuming they are all mentally ill or in some way dishonest, or childishly inferior to ourselves, let’s at least keep our mind open to all possibilities, with one of those possibilities being that their experiences reflect a reality of some sort. Or in other words, in some way or another, spirits exist, consciousness echoes on outside of time and not all forms of sentient life assemble bodies in the way we do.

You can view Standing Not Falling on Amazon. It is published by Moon Books