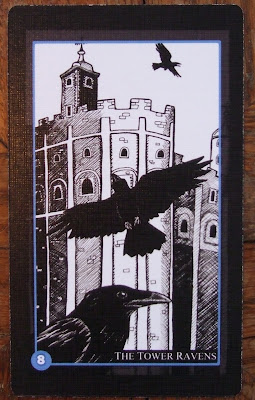 The tale depicted in this card is, if the ravens at the Tower of London are lost or fly away, England will fall. I have to say that in the current political climate, that particular omen is a worry. Nevertheless, the real ravens at the Tower are thriving. Last month it was announced that two resident ravens - called Huginn and Muninn after Odin's birds - had chicks. You can read a news story about it here.

It is also worth bearing in mind that the legend itself isn't ancient. According to the book City of Ravens, it only started in the summer of 1944, when ravens in London were used as effective, but unofficial, spotters for enemy bombers. Nevertheless, ravens were once common in London, and were useful in cleaning refuse from the streets in bygone times. One theory about the city name is that it comes from the Roman version of the Celtic name "Lugdunum", which translates as "the town of the god Lugh" or "the town of ravens".

The book that comes with the London Lore Tarot says that if you draw this card in a reading, it is time to move on from something you are disenchanted with. It can suggest actually leaving home, or it can indicate a search for new meaning in life. The suit of cups relates to the element of water, which is about emotions or matters of the heart.

In the Rider-Waite-Smith deck, the eight of cups shows someone walking away from a stack of cups by a river. It is about disillusionment and abandoning things that might once have seemed fulfilling, but now seem shallow or empty. The journey ahead might be hard, but offers a new perspective, a chance for growth and, potentially, a better future.

Really interesting post, will put a link on my blog page so my bloggers can visit here. Kat 😊