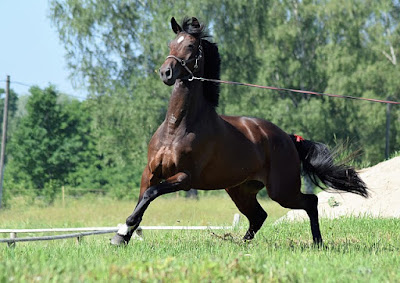 Here is an extract from the book Black Horse, White Horse, by Melusine Draco, about power animals within traditional witchcraft and folkloric practices:

To fully understand the magical dynamics of equine energy, it is important that we neither trivialise nor sentimentalise the power behind it, and an extract from the Dick Francis novel, Straight, seemed to bring us full circle to where we came in at Chapter One. Here the hero (himself a jump-jockey like the author), reflects on the inner driving force that determines the character of a particular winning horse he rides:


‘The will to win was born and bred in them all, but some cared more than others: it was those with the implacable impulse to lead a wild herd who fought hardest and oftenest won. Sports writers tended to call it courage but it went deeper than that, right down into the gene pool, into instinct, into the primordial soup on the same evolutionary level as the belligerence so easily aroused in homo sapiens, that was the tap root of war. I was no stranger to the thought that I sought battle on the turf because, though the instinct to fight and conquer ran strong, I was adverse to guns. Sublimation, the pundits would no doubt call it. Datepalm and I both, on the same primitive plane, wanted to win.’

For our distant ancestors the cosmic turbulence visible from the Earth could easily have been visualised as the thundering of horses’ hooves, the flashes of lightening the sparks that flew from the celestial shoes and chariot wheels. According to Man, Myth and Magic, mythology makes much of the famous ‘Wind Horses’, such as Pegasus and Hofvarpnir, (the steed of Gna, messenger of Frigg) accompanying these violent storms were the terrifying winds and driving rain, often seen as great armies joined in battle beyond the black clouds obscuring them from view. And out of this aerial violence came the legend of the Wild Huntsman, ‘with his thundering horse and baying hounds, searching the highways and byways for luckless souls, who happened to get in his way’. 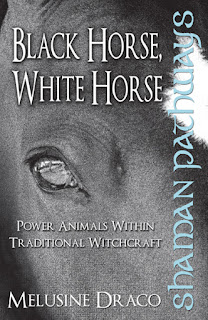 A real horse that surely symbolises this ancient ‘hell on earth’ is what has been described as one of the greatest thoroughbreds of history: Warrior – who belonged to General Jack Seely. Over four million horses died in the Great War but Warrior not only survived but was trained to stand still under machine gun fire. To cap it all he returned to win a point-to-point, eventually being put down in his thirties and buried on the Isle of Wight. Warrior is certainly up there with Wellington’s more famous Copenhagen, and Seely, so legend has it, even recommended Warrior for a VC. By comparison, Copenhagen was unceremoniously dismantled after death, and his hooves mounted and presented to various cavalry regiments.

The power, speed and pride encapsulated in the horse is not one with which we can easily assimilate, even on a shamanic level, for the reasons that Dick Francis again observes in Whip Hand:


‘Beautiful, marvellous creatures whose responses and instincts worked on a plane as different from humans’ as water and oil, not mingling even where they touched. Insight into their senses and consciousness had been like an opening door, a foreign language glimpsed and half learned, full comprehension maddeningly balked by not having the right sort of hearing or sense of smell, not sufficient skill in telepathy. The feeling of oneness with horses I’d sometimes had in the heat of a race had been their gift to an inferior being; and maybe my passion for winning had been my gift to them.’

If we wish to utilise and tap into this elusive and primordial strength as a focus for magical working, it must be with a high degree of trepidation and a lot of respect. This is not energy that we can control or negotiate with; if we log-on then we must be prepared to be trampled and kicked in return. It also reflects the fact that people either know or fear horses – there is no middle ground and this is how it should be with their magical energies. Our ‘knowing’ gives us the understanding to interact with equine energy, but there should be no disgrace in fear either. Like all magical pathways, equine-energy is not for everyone and the wisdom is in the knowing: and understanding when to walk away.

Despite the primordial influence the horse still has over mankind, as George Ewart Evans points out, the richest combination of surviving beliefs and customs centred in the heavy horse up to the first part of the 20th century when horses were still an important part of British farming. So here we have those two different types of energy: the war-horse (which includes the hunters and racers) and the workhorse. The differences may be subtle but they are there, and they are important!

You can view Black Horse, White Horse on Amazon. It is published by Moon Books in its Shaman Pathways series in paperback and e-book format.