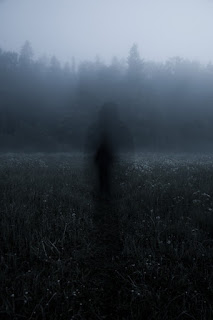 On Saturday 23 November, The London Fortean Society returned to the Haunted Landscape, its semi-annual one-day symposium on the folklore of the British Isles.

As usual, it was a brilliant day. This year the talks were on monsters, fairies, ghosts, witches' familiars, protection magic,  and strange annual customs in rural villages.

In the first talk, folklorist Doc Rowe looked at The Rites and Wrongs of Autumn, with the help of pictures and videos of events, including tar barrel burning in Devon's Ottery St Mary, the Abbots Bromley Horn Dance and numerous less well known but equally odd customs. He explained that these are living and changing customs, rather than ossified rituals. New songs get sung, new costumes are introduced and procession routes change. Also, few are quite as ancient as popular belief maintains.

Christopher Hadley, author of the book Hollow Places: An Unusual History of Land and Legend, then talked about his research into the story behind Piers Shonks, whose tomb in a Hertfordshire church bears the legend of supposed dragon-slaying in the Middle Ages. It was a fascinating insight into how tales of dragons grow, but Christopher Hadley didn't relate the entire story. Instead he encouraged listeners to buy his book, which I might be tempted to do. You can view Hollow Places on Amazon. 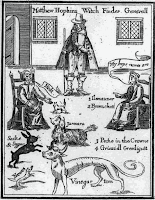 The talk I was most looking forward to was that of Dr Victoria Carr on English Witches and their Familiars. She looked at several witchcraft trials from the 16th and 17th centuries that involved both women and men making deals with magical creatures and sending them to create mischief. This is a subject I'm particularly interested in at the moment, so I will write up a longer account of Dr Carr's talk later.

The Croglin Grange Vampire was the subject of  Deborah Hyde's talk. The story goes that in 1875, a vampire removed the lead in a windowpane to let himself into a remote, rented farmhouse in Cumberland, and bit the throat of the young woman sleeping within. Attacks stopped when her brothers tracked the creature to a local crypt. Deborah Hyde showed that the house and church in the story had probably really existed, and also discussed reasons people believe in the undead. Deborah Hyde is a brilliant speaker and I always look forward to her talks. She is the editor of The Skeptic magazine, but also an expert on vampire folklore.

While English vampires are uncommon, English werewolves are rarer. Dr Samantha George looked at the tale of Old Stinker, the Hull Werewolf. This involves modern sightings of a wolf-like man near a remote ditch. She believes werewolf stories are rare in England because wolves are long extinct here, but the new story could be due to a resurgence of interest in them. Dr George is the author of In the Company of Wolves, due to be published in 2020.

Brian Hoggard looked at Magical House Protection: The Archaeology of Counter-Witchcraft. He is the author of a book of that name, and in his talk looked at witch-bottles, dried cats, horse skulls, written charms, protection marks, and concealed shoes, which were all used widely to repel, divert or trap negative energies. You can view Magical House Protection on Amazon.

Following on was a talk called England's Historic Graffiti: Voices Preserved in Stone, by Crystal Hollis. She covered some of the same material as Brian Hoggard, as many examples of graffiti are protection marks. However, there are also many other examples. Her advice was, if you spot some historic marks on walls, don't touch them as that can wear them away. Photograph them using an oblique light source to best record them.

Dr Richard Sugg talked about fairies causing mischief, particularly in Ireland, and put forward the idea that many accounts of these activities might instead be the work of poltergeists. He is the author of Fairies: A Dangerous History, which you can view on Amazon. Paul Devereux also talked about fairies and how sightings of them related to death roads, where coffins were traditionally carried across country to churchyards for burial. He is a prolific author, but you can view Spirit Roads: An Exploration of Otherworldly Routes on Amazon.

The Haunted Landscape ended with Roar by Blanc Sceol, described as "A performative intervention exploring the other-worldly sounds of the ‘bullroarer' ‘buzzer’ ‘hummer’ ‘bummer’, using replicas of specimens found across the British Isles."

London Fortean Society hosts talks throughout the year. You can find the programme of events here:
http://forteanlondon.blogspot.com/

Oh my! I've always wished I lived in the UK. It's certainly seems to be where my soul lives. Lucky, lucky you.

My first trip to the UK involved a prolonged and very enjoyable stay in Newcastle with a friend who introduced me to the Fortean Times. I blame that publication for my decision to later do a Master's degree in Folklore. Which is why I now live on a rock in the mid-Atlantic...as close as I can get to the UK without actually being there (the Canadian province of Newfoundland & Labrador).

Anywho, as a long time lurker of your blog I just want to say...thanks so much!

And in regards to werewolves in the UK don't forget all those black dogs on the moors :)

Thanks for your comment! Yes, there is a certainly lot of black dog folklore in the UK, but it is a bit different from werewolf folklore, as I'm sure you know.