Divination: Byzantine Tarot and the Nine of Swords 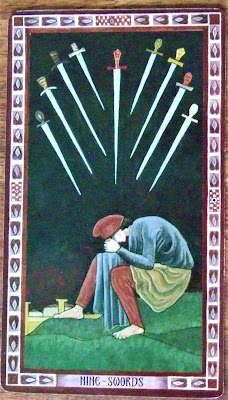 The word Byzantine is synonymous with political intricacy and chicanery. As we go to vote in an election that has been fraught with both of those things, I thought I would draw a tarot card for the day from the Byzantine Tarot. I drew the Nine of Swords, which seemed particularly apt.

I hope the cards' creators, Cilla Conway and John Matthews, won't mind me quoting the meaning at length.


Traditionally, the meaning of this card suggests a time of crisis or despair. Whatever is happening may feel especially overwhelming, and it's difficult to see past the threat of danger or loss to possibly calmer waters. There must have been many times when Byzantium felt threatened in this way, particularly during one of the long sieges that came close to overthrowing the city. Even its famously mighty walls and powerful gates seemed inadequate when the massive forces of the Bulgarian Khan Simeon twice almost overcame the Byzantines, in 895 and 913 CE - though, in both instances, clever diplomacy and help from neighbouring kingdoms helped them survive.

Never a happy card, this is often interpreted as meaning that a difficult choice lies ahead - one that could lead to sacrifice or loss. It also suggests a timid person who may be the victim of slander or gossip and lacks the strength to defend themselves. The problem referred to may be happening to another, someone to whom you are close, rather than you; thus you are afflicted by anxiety for the other person but affected within yourself.

Think about who those needed help defending themselves and how you can best help them with your vote today. But also remember that this card can be about fears of things that may not come to pass, even though the crisis and the threat of loss is real.

If you want to find out more about this deck, you can view the Byzantine Tarot on Amazon.