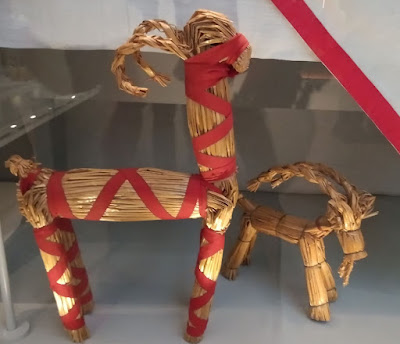 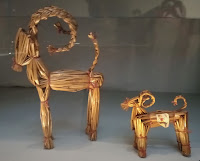 It is December, so are you ready for some Yuletide folklore? These lovely little straw animals are Christmas goats from Sweden. They are on display at the Horniman Museum in south east London. According to the museum's information:

The Yule goat predates Christianity and is probably connected with the Norse god Thor. Thor rode across the sky in a chariot pulled by two goats. At harvest time the last sheaf gathered was thought to have lucky properties and was saved for making into the Christmas goat.
During the 19th century, one of the men of the family would dress up as a goat, knock on the door, and hand out gifts to children. By the early 20th century, a mythological figure, Tomten, had taken over the role, but the goat is still used for decoration.

I am really tempted to go out into my garden and see if I can find some dried grasses suitable for making into a Christmas goat to bring luck to my own Yuletide festivities.

The Horniman Museum and Gardens is at 100 London Road, Forest Hill, London, SE23 3PQ. You can find out more about the museum here: www.horniman.ac.uk/