Divination: Two of Winter (Swords) in the Animal Tarot 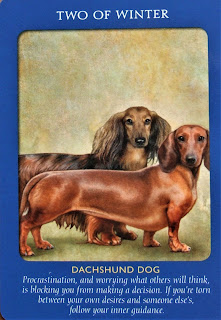 I felt the need for some inspiration for the day by drawing a tarot card, but wanted something a bit fluffy. You don't get much fluffier than Doreen Virtue's Animal Tarot, which is a deck I turn to when I want gentle suggestions to help me deal with life's problems.

The card that came out was the Two of Winter. That's the Two of Swords in a standard tarot deck. That is about making difficult decisions, often between two courses of action. In the Animal Tarot, it represents procrastination. I am suffering from that at the moment. I'm trying to write my next book, but I'm finding it a bit of a struggle and I spend far too much time doing other stuff - chatting on Facebook especially.

The card suggests that what's getting in the way is worrying too much about what others will think. That has hit the nail on the head with me. Rather than just writing what I want to write, I keep worrying about who might find fault with it or who will disagree with my opinions. Recognising that blockage has helped. After the first draft is finished I can get other people to read it and comment, and I can make changes and corrections. Until then, I should write from the heart and trust my own intuition. All first drafts have mistakes, I need to accept that and stop worrying.

The picture of the Two of Winter is a pair of dachshund dogs. Drawing that card, with that image, made me think about a friend I haven't seen for ages who has a little sausage dog. Perhaps this is also a reminder to try to catch up with them again.

You can read my earlier review of The Animal Tarot here: http://www.badwitch.co.uk/2017/11/review-animal-tarot-by-doreen-virtue.html