Extract from You Let Me In by Camilla Bruce 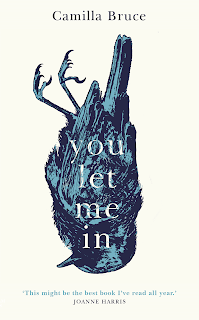 World Book Day is a week away, on March 5, so between now and then I will be sharing a few blog posts about books. Here is an extract from a novel due to be published on March 5. It is described as a bizarre and brilliant mix of horror, thriller and fantasy and is called You Let Me In by Camilla Bruce:

This I remember: the horrid sound when the flowerpot crashed to the floor. I was five at the time, standing by the living room window, bright sunlight was streaming inside, and thin white curtains billowed in the breeze. My companion – my only friend – smiled at me, a toothy grin.

I called him ‘Pepper- Man’, for the strong scent that emitted from him, warning me of his arrival. Usually he would appear at the end of my bed, sat there cross-legged, grooming his hair with a comb made from bone, or twisting twigs into animals and crowns; gifts for his little girl.

His skin was gray and gnarled, black warts clustered at his joints, his long white hair hung nearly to his knees, ragged and dry as old hay. He was very tall. His fingers were long. They had just swept the newly filled flowerpot off the white-painted windowsill and now his dark eyes, the color of moss, were watching the door expectantly – curious.

Pepper-Man’s black lips drew back from his teeth when my mother came into the room. The gray tatters that clothed his ungainly body shifted and moved in the draft from the door.

‘Oh, Cassie,’ my mother said, hands on the hips of her navy-blue skirt. ‘Why do you keep doing that? I told you to leave those flowers alone.’ Her gaze was on the red petunia, petals crushed by dirt and pottery shards.

‘It wasn’t me.’ I twisted my sweaty hands in the skirt of my yellow summer dress. ‘It was Pepper-Man—’

‘Oh, won’t you stop with that already.’ She crossed the floor swiftly, mid-sized heels clicking on the floorboards. ‘Where is this Pepper-Man, then? Flew out the window?’ She bent down, collecting sharp pieces of pottery in her hand. My friend was towering above her, still with that curiosity in his gaze, that smile plastered to his black lips.

‘No,’ I said, breathless, watched as my mother’s stiff hair nearly brushed Pepper-
Man’s body when she straightened up again.

‘You are a big girl now, Cassie,’ said Mother. ‘I think it’s time you stopped blaming someone else for your mistakes. This is the fifth flowerpot this week, why can’t you just leave them be? What did the poor flowers ever do to you?’

‘Nothing,’ I muttered, my gaze on the floor, where Mother’s black and shiny shoes stood next to the twisted toes of my friend. I just wanted her to go away, didn’t trust Pepper-Man around other people. He was capricious and sometimes cruel, too curious about everything. His hand reached now, for the top of her head; fingers flexing, rubbing together; long nails stretching through the air. ‘They are stupid,’ I said quickly, to grab her attention and get her away from Pepper-Man’s fingers. ‘I hate the flowers! They are stupid flowers! They are ugly and red and I hate them!’ I spun around, grabbed another flowerpot from the windowsill, this one topped with fluffy, white blossoms, and threw it hard to the floor. Dirt spattered everywhere. This pot didn’t break but rolled across the floor, coming to a halt by my mother’s feet. Pepper-Man’s hand retracted.

‘Cassie!’ Mother cried, dropping the broken shards she held. They landed on the floor, in the heap of dirt and greenery. ‘Look what you made me do.’ She held up a finger. Fat droplets of blood trailed her white skin, aiming for her golden rings.

‘Good,’ I said and stomped my foot. Pepper-Man’s thin nostrils flared, his black tongue came out to lick his lips. He liked blood a lot.

Credit: Extracted from You Let Me In by Camilla Bruce, published on 5th March by Bantam Press.

You can view You Let Me In on Amazon. The photo at the top shows the cover of the book, the bottom photo is of Camilla Bruce.

Email ThisBlogThis!Share to TwitterShare to FacebookShare to Pinterest
Labels: books