The Awen Symbol and an English Temple Mystery 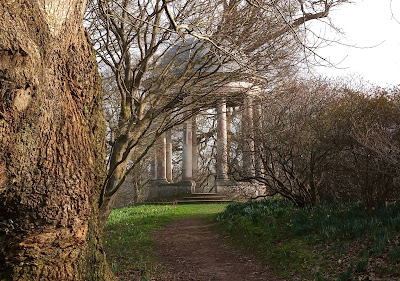 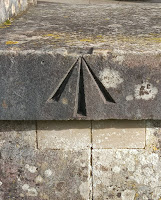 The picture above shows the Ionic Rotunda in the grounds of Petworth House, in West Sussex. It was designed to look like the Temple of Vesta at Trivoli, Italy, and was built in 1766 as part of a pleasure ground designed by 'Capability' Brown.

I visited Petworth last week and took the photo at the top. I also took the photo to the right, showing a symbol made up of three lines, carved into the stone just to the right of the temple's doorway. I asked two people at Petworth's information desk if they knew what it meant, but they had no idea. To me, it looks a bit like the Awen symbol of modern druidry, although that normally has three dots at the top and is often surrounded by a circle. I do love a bit of a mystery...

The Awen symbol dates back to the 18th century and the revival of druidry by Iolo Morganwg, according to the British Druid Order. It is said to primarily represent three rays of light, but can also mean the three grades of Bard, Ovate and Druid, or the flow or spirit or inspiration. It is, of course, quite possible that a few druid revivalists of the 18th century visited Petworth and thought the temple on the top of a hill, overlooking woods and gardens, was a perfect place for a ritual. I would certainly agree with them if they did.

Sadly, I suspect the symbol had a more practical purpose. I chatted with one of the art historians at Petworth. Although they said they hadn't noticed the mark before, they suggested it might be a trig marker, or a bench mark. You can see in the photo that there might once have been something attached to the stonework just above the three lines. Trig markers are often found on high spots and are used for surveying purposes. Bench marks associated with them occasionally looked like arrows carved into stonework. A small bronze disk would have been set above the arrow, to provide a stable place for surveyors' rods to be placed.

There is a very similar bench mark on the stone plinth below King Charles I's statue in London's Trafalgar Square. This was originally the site of the medieval Charing Cross, and is still the point from where distances from London are calculated.

Mind you, when it comes to the mark on Petworth's circular temple, I like to imagine that maybe the mark was dual-purpose. Maybe some surveyor of a pagan persuasion deliberately hid the symbol of druidry within the bench mark of his trade.

It could be an Ordnance Survey benchmark.
https://blog.stonehenge-stone-circle.co.uk/2016/11/18/ordnance-survey-benchmarks-at-stonehenge/

Looks like the old 'War department' (precursor of MOD) mark. We've got lots of them round Plymouth dockyard.