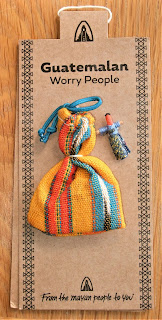 The little dolls in the pictures above and right are Guatemalan worry people. They are tiny, measuring about 2-3cm high. I bought the set you can from my local Oxfam charity shop, as a little extra present for my husband last Yule. They come in a little bag and he has only just opened them, but says he now intends to use them. As the instructions that come with the set say:

The set I bought was made by the Mayan People who live in the highlands of Guatamala. They are mostly farmers, but also make things and sell them to raise extra income. The worry people sets are imported by Shared Earth, an ethical fair trade company. When I buy things like this, I do like to check if they are crafted by people of the culture from which they originate, rather than mass-produced in some sweatshop factory.

However, I also had a go at making a worry person myself using upcycled materials. You can see the result in the photo below. My little doll isn't nearly as well made as the real thing, but I'm not too displeased with it. 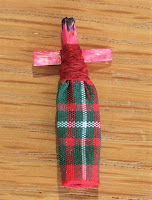 I made the body from a used match, cutting off the burnt bit, and then cutting it a third of the way down to create arms and a body. I shaved some wood off the arm section to thin it, and cut grooves in both bits of match where the arms were to cross the body. You could use a craft knife for this, but I just did it with a pair of scissors, as matchsticks are very soft. I then glued the arms to the body. Using a felt pen, I then coloured the arms and body a base flesh colour.

For the skirt, I cut a small piece of ribbon from a length that had once tied up a box of chocolates. I folded the ends in, then glued that around the doll's body, under the arms. I fixed the skirt in place and made the arms more secure, as well as forming clothing for the top of the body, by wrapping cotton around it. Finally, I used felt pens to create hair and dots for eyes and a mouth on the face.

I am intending to make an entire family of them to help ease my own worries in the difficult times we all face.

You can find out more about magical doll customs from around the world in my book Pagan Portals - Poppets and Magical Dolls.