Tarot for the Day: Four of Autumn (Coins) - Fairy Tarot 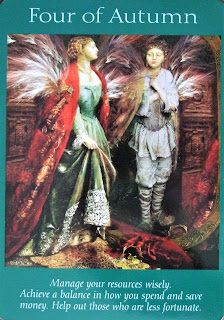 Sometimes, when times are hard, it can feel less daunting to do tarot readings from packs that offer gentler interpretations than more traditional decks. I've recently felt drawn to use the Fairy Tarot, which is specifically designed to offer positive meanings aimed at inspiring people to do their best in any given situation.

A card I just drew was the Four of Autumn. Autumn corresponds to the suit of Coins or Pentacles in more traditional tarot decks. In the Rider Waite Smith deck the Four of Coins/ Pentacles is depicted as a miser clutching his wealth. In the Fairy Tarot, the Four of Autumn's illustration shows a person in drab attire looking jealously at someone richly garbed with a snooty expression. This card is about material wealth, but it is also about how our perceptions can be blinded by money.

There is a summary of the meanings printed on each card. Four of Autumn states: "Manage your resources wisely. Achieve a balance in how you spend and save money. Help out those who are less fortunate." The longer description that comes with the book says: "Comparing yourself to others can create confusion. You may not be seeing things as they truly are. You might feel as though you don't have enough when really you are blessed with more than you realise. Remember to give to those in need."

This is an important message, especially when many of us are living in isolation, and possibly struggling to make ends meet. It is important to manage our finances - and other material things - sensibly. Look after yourself and plan for the future, but also try to help those who are less well off.

Charities are struggling at the moment because they are unable to raise funds through high street shops, but still want to be able to support the people or animals they were set up to assist. It might be worthwhile seeing if you can help by making a donation or volunteering in some way. This can even be an opportunity to learn and widen your horizons. I felt this message was pertinent for myself. Last weekend I took part in an Oxfam campaign by doing a short video at home. This will be compiled with clips from other volunteers for a social media effort to raise awareness for the charity.

The Four of Autumn card, as well as being about money and finances, is also about trying to avoid jealousy. It can be easy to be envious of those we feel are more privileged than ourselves, but we don't always know the whole story. Just because someone is wealthy, doesn't mean they are without their own problems. Try to look past appearances, and treat all other people with compassion.

You can view the Fairy Tarot on Amazon.