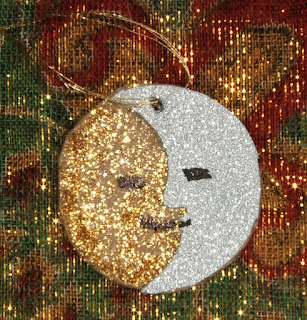 Here is an easy little protective amulet with the symbols of the sun and moon that you can easily make at home. It would be perfect to help give you good luck when travelling.

Historically, figures have been attached to boats and other methods of transport to magically protect them and those within from disaster. Ship prow figureheads and car bonnet mascots are examples of this – my favourite is the Rolls-Royce Spirit of Ecstasy. Today, I wouldn’t recommend attaching a figure to the outside of your car, it is more likely to get stolen than protect you from anything, but you can make an amulet of protection to put inside a vehicle.

For Christians, the St Christopher was the traditional symbol to wear when travelling. For a pagan alternative, the Greek God Apollo drives the chariot of the sun and can be called upon for aid. Roman charioteers would often seek the favour of Luna, Goddess of the moon, who was their dedicated protectress.

An easy amulet to make is to cut out a small circle from gold-coloured card for the sun and a crescent moon shape of the same height from silver card. You can upcycle metallic packaging or even greetings cards with gold or silver on them. If you don't have any gold or silver paper or card, then you can use plain card and put glitter on it or use paints or pens to colour it in.

Stick the moon on top and to one edge of the sun disk. Draw a half-face of an eye, half a mouth and a half-nose on each of the sun and the moon, so they seem to join in the middle. Punch a hole at the top of the disk and put ribbon through it. Cast a circle and ask the blessings of the sun and moon for protection on your journeys or wherever you need it, then hang the amulet in your vehicle or other places where you want to feel extra safe.