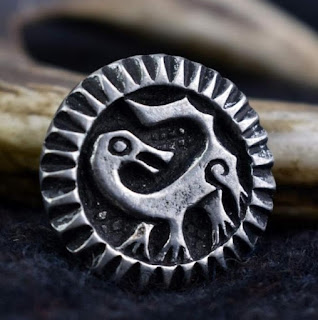 Here is a Viking mystery: what is the meaning of the Backward-Looking Beast?

I only came across this little beastie when I saw this brooch (pictured) in the House of Spells Viking collection. The description says it is a replica of a Viking brooch found at Coppergate, York. The original dates from the 10th century and features an animal looking over its shoulder. A similar design is seen on quite a few Viking brooches from that era.

Curious about what the Backward-Looking Beast represented, I did a bit of research. I found a picture of an original brooch on the Vikings in the East Midlands virtual museum website. It suggests the animal is meant to be a horse, and that brooches were commonly worn by Viking women as fastenings for clothing.

Last summer one was on show at Norwich Castle in an exhibition of Viking-era finds. It prompted an article in the Eastern Daily Press, reporting that hundreds of similar brooches have been unearthed, mainly in East Anglia and Yorkshire: "Each has a running animal, its head on the left of the design with a mane flowing down the left of the brooch, its spiky tail pointing upwards and its snout filling the space above its back as it glances, with a circular eye, back over its shoulder." 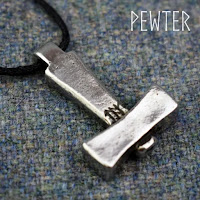 Jewellery was popular with both Anglo-Saxons and Vikings. Some designs may have been worn by people as symbols of their cultural identity at a time when newcomers were integrating with older communities. Some, such as Thor's hammers (the picture right is an example from the House of Spells website), were also worn as good luck charms. The Backward-Looking Beast appears both as a Anglo-Saxon and Viking symbol, so isn't likely to be just for cultural identity.

Archaeologist Norman Smedley, in 'Some Anglo-Saxon Animal Brooches', writes that the design was originally popular with Anglo-Saxons, but was later copied and adapted by Vikings. He suggests the design might have had magical significance, as all of the complete versions he studied had precisely 28 beads around the border. He writes:


"It seems quite incredible that this constancy in the number of marginal beads can be the result of mere chance, though the precise significance is impossible to determine. Was the brooch some form of distinctive badge? Or had it some magical import? Twenty-eight is a multiple of seven, a number generally regarded as having an occult significance."

I'm not sure whether that completely solves the mystery, but it does suggest the Backward-Looking Beast brooch is more than just an attractive design. The replica you can buy from House of Spells is a cleaned up version of the original, which was severely worn. The brooch is available in pewter or bronze, and comes with a gift box. As I mentioned last week, I've managed to arrange 10% discount for readers of A Bad Witch's Blog on items bought from House of Spells, using this link:  https://houseofspells.co.uk/discount/BADW1  Delivery in the UK is free.

As well as ordering online, you can visit the shop in person and use the code BADW1 at the checkout to get the 10% discount. House of Spells is a two-minute walk from Leicester Square tube station at 69-71 Charing Cross Rd, West End, London WC2H 0NE. The hours are Monday to Friday from 10am to 8pm, and to 9pm at weekends.

Lovely Post! My own, rather prosaic interpretation is that by having the animal face backwards it fills in a spot in a roundel, making it easier to fit a circle.

In other words, it's an artistic decision - a forward-facing creature would fit better an oblong shape! It would be interesting to see if there how many oblongs with backward facing animals there are as opposed to circles with forward-facing beasts!

Yes, the books and articles I've looked at do also mention that a backwards facing head fits neatly into an oval or oblong design, and an artistic decision is one of the possible reasons for the design. However, academics who specialise in Viking and Anglo-Saxon art and jewellery point out that the symbolism on artefacts is usually more than purely artistic. There is usually a lot of symbolism involved as well as a lot of pleasing artistry. I nearly mentioned the artistic reasons in my blog post, but it was getting a bit long so I left that bit out.

Also, the details of the specific number of beads in the border seems more than coincidence.