Extract: Scavengers of Beauty - Mission to the Moon 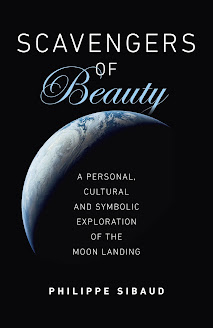 Here is an extract from a new book called Scavengers of Beauty, by Philippe Sibaud. In it he explores the symbolism behind the 1969 Moon landing, and asks why the mission to the Moon was named after the God of the Sun, and not after a Moon Goddess or God?
The tremendous effort that placed man on the Moon is worthy of admiration. By one reckoning, 400,000 people participated in this collective endeavour, an incredible feat of coordination, dedication and scientific excellence.
In 1970, the great mythologist Joseph Campbell immediately grasped the importance of what had happened, enthusing about a night when “our incredible human race… [had] just broke free of the earth to fly forth to the opening of the greatest adventure of the ages.”
But beyond the heroic dimension of the Moon landing, is another reading possible? “In that immense project… that sent man to the moon,” said Jungian psychologist Edward Edinger, it was Apollonian man, represented by the scientists and the planners and their ideas, who made that leap possible, while Hephaeistian man, signified by the engineers and the factory workers, made the equipment and the hardware that brought success.
Arean man, represented by the astronauts, had the courage and the aggressive energy to make the trip, and Hermetic man, in those who are yet to come, will grasp the larger, hidden, and symbolic meaning of the arrival of man on the moon. Named after Hermes, messenger of the goddesses and gods, a deity held to be “the mediator of all hidden wisdom,” the Hermetic man seeks to be a bridge, a messenger, a translator, an interpreter. “It is by interpreting,” says French philosopher Paul Ricoeur, “that we can hear again.” This work, then, probes possible ways to interpret the Apollo mission – it proposes a hermeneutics of the Moon landing. What is hermeneutics?
The theory of interpretation is the short answer. But as historian of religion Jeffrey Kripal emphasizes, there is more than meets the eye: “in hermeneutics, as in quantum physics, there is a single process that co-creates both the subject and the object at the same time.” In other words, an interpretation is not a neutral exercise between an objective interpreter and a subject detached from him (her).

Just as in quantum physics experience and experiencer are in a dance, a powerful feedback mechanism is at play in the hermeneutic undertaking – the ‘hermeneutic loop’, as Kripal calls it. One is interpreted as one interprets. The act of hermeneutics is accomplished through the human imagination and its symbolic expressions. Its language is the image. The imagination, however, and crucially, is not to be regarded as a fanciful or innocuous movement of the mind. Quite the contrary, an important distinction must be made between flights of fantasy – the ‘imaginary’ – and the imaginatio vera of Paracelsus – the ‘imaginal’.
The imagination, in that latter sense, is a bridge, a bridge to the darkness within and without, a bridge, too, to radiant light; it is a medium that speaks to the unspeakable, to the Mystery, and in turn is spoken to – in images, often; in abstruse language, sometimes. A very serious endeavour it is – which does not preclude playfulness. With it, through it, we encounter leela, the divine play.
Scavengers of Beauty can be viewed on Amazon and is available wherever books are sold, including publisher O Books' website: https://www.johnhuntpublishing.com/o-books/our-books/scavengers-beauty
Pictured: The book cover and author Philippe Sibaud