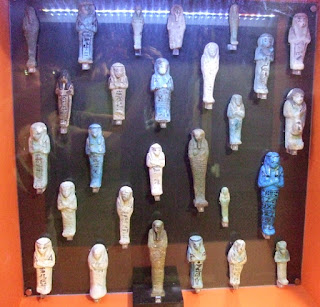 Most museums that exhibit items from Ancient Egypt will have little effigies like this on display. They are coffin servants known as ushabtis or shabtis. Ancient Egyptians buried them in tombs to serve the occupant in the afterlife. They are often displayed with things like farming tools, indicating the role they were supposed to play.
I took this photo some time ago when I was at Maidstone Museum for a Terry Pratchett exhibition, but was reminded of it when I was reading the entries for November in the Moon Books community book Every Day Magic:

While I think it's good to learn about the funerary customs of those who lived in the past, I also know that excavating people's graves is a controversial subject. I recently engaged in a heated debate in a pagan group about just that. Many pagans these days feel it is wrong to interfere with ancient burial practices, or remove bodies from the place in which they were laid to rest. Others feel that archaeological excavations and scientific examination of both bones and burial sites are the best ways we can learn about our ancestors from the distant past. To be honest, I'm in the latter camp, although I do believe human remains should always be treated with respect.
What are your thoughts on the subject? Please leave a comment.
You can view Every Day Magic on Amazon.
Previous related posts
http://www.badwitch.co.uk/2010/10/egyptian-journey-through-afterlife.html
http://www.badwitch.co.uk/2021/06/book-excerpt-my-inner-guide-to-egypt.html
http://www.badwitch.co.uk/2017/11/event-ancient-egyptian-curses-at-petrie.html
http://www.badwitch.co.uk/2010/02/pagan-eye-sphinx.html
Posted by Badwitch at 08:00

There are valid arguments on both sides. Personally, I think they should be put back after they have studied them. If these are meant to serve them in their afterlife, what happens when they have been taken away? I'm all for finding out about our ancestors, but it does feel a little wrong to be disturbing the dead.

I totally agree with L FireOak's comment. I'm sure there's a strong connection between the plundering of Tutankamun's tomb and the dreadful things that befell those who took part. When someone's sent off to the Afterlife with all their grave goods, it's their and their family's business, not someone else's property for the taking.

The stories of the Curse of Tut make for great reading but alas have been examined at detail over the years and found to be false. That said, the details of how the legend of the Curse came about are even more interesting than the actual legend.