Review: Hauntology - Ghosts of Futures Past 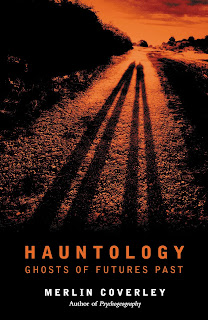 Christmas Eve is a time for ghost stories, so here's a review of a book about them. Mind you, Hauntology - Ghosts of Futures Past by Merlin Coverley is about more than tales of spirits coming back from the dead. Hauntology is the concept that pretty much anything virtual - as in not physically existing - can become a spectral visitation. That includes ghost stories, of course. The book starts with a look at Dickens, and goes on to cover MR James, Arthur Machen and several other authors of classic spooky fiction. But there's a lot more.

The idea of hauntology is that we are all haunted by our memories of the past and nostalgia for bygone times, and by our hopes that died yet refused to rest quiet. Oh and yes, the book does look at beliefs in the esoteric and paranormal too - as well as psychology and theories of post-modern social disconnectedness. Publisher Oldcastle says on its website:

"Ghosts and spectres, the eerie and the occult. Why is contemporary culture so preoccupied by the supernatural, so captivated by the revenants of an earlier age, so haunted? The concept of Hauntology has evolved since first emerging in the 1990s, and has now entered the cultural mainstream as a shorthand for our new-found obsession with the recent past. But where does this term come from and what exactly does it mean?

"This book seeks to answer these questions by examining the history of our fascination with the uncanny from the golden age of the Victorian ghost story to the present day. From Dickens to Derrida, MR James to Mark Fisher; from the rise of Spiritualism to the folk horror revival, Hauntology traces our continuing engagement with these esoteric ideas. Moving between the literary and the theoretical, the visual and the political, Hauntology explores our nostalgia for the cultural artefacts of a past from which we seem unable to break free."

The term hauntology was apparently coined by French philosopher Jacques Derrida in the 1990s, when he wrote about the "spectre" of Marxism and its legacy. The term got taken up by Mark Fisher, a cultural theorist, first to describe the work of artists and musicians then to describe the effect of pretty much anything unreal that impinges on reality. He wrote: "think of hauntology as the agency of the virtual."

Coverley also describes techniques of hauntology as being a way to explore our perceptions of time - past, present and future - in a similar way to how psychogeography is a way of exploring our perceptions of place. They are connected through concepts like ley line theory and deep history. I was very much inspired by his earlier book called Psychogeography, and I'm pretty sure I'll be inspired by Hauntology too. I look forward to hunting out the ghosts of futures past in whatever strange new world we will find in a hopefully post-plague-year London of 2021.

You can view Hauntology on Amzon and on uk.bookshop.com.

Wow, these look like a couple of interesting reads! Thanks, Lucya.

Useful and authentic Contents or information, my authentic website is similar to your wesite and we request for backlink's exchange.
https://govtexaminfo.com/latest-jobs/