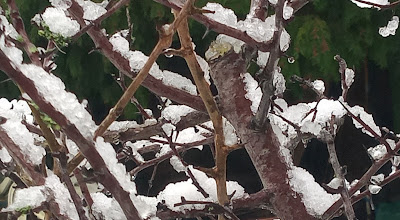 I love the snow. I have done ever since I was tiny, as I'm just old enough to remember the long winter of 1963. I remember building snowmen and tobogganing in the park and having snowball fights. I was fascinated by the fernlike patterns of ice that built up on the windowpanes, and remember listening in awe to my father telling me tales of Jack Frost, who was responsible for creating them. In fact, I was so delighted by the tales of Jack Frost, and pestered my father for more and more tales about him, that I expect he made some of them up. 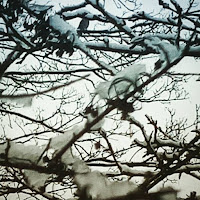 Jack Frost is a kind of trickster spirit of winter, apparently more common in tales from Eastern Europe than England, but then again my dad was from Poland. But in our house, Jack Frost ended up being blamed for all sorts of things that went wrong in winter, from chilblains to burst pipes to stealing the milkshake that was in the fridge... (Yes, I did eventually realise my dad was behind that last one). I loved the idea of Jack Frost so much that in warmer weather my dad invented his brother, Pretend Frost, who misted up windows rather than freezing them.

My love of winter weather hasn't gone away, and yesterday I was delighted when it snowed. I sat in the warm, sipping my coffee and watching the big fat flakes of snow fall, covering everything in a blanket of white. Then, when it stopped, I went outside and took some photographs. In normal times, I'd have been donning my snow boots and going off for a long walk around Crystal Palace Park to see it transformed into a winter wonderland, but I'm being ultra cautious at the moment, so I just stayed in my own garden.

But I said this is a guilty pleasure, and it is. I am lucky that I can go indoors to the warm. I'm lucky that I can afford to heat my home and have a roof over my head, as there are plenty of people who don't have those luxuries. Icy pavements also make it difficult for the elderly or those with disabilities to get to the shops. Jack Frost might make the world look beautiful, but really, he can also be a killer. If you know someone who might be struggling in the cold weather, do consider phoning them and checking they are okay.

Earlier this month I wrote a guided visualisation on the winter garden, and you can find that here: http://www.badwitch.co.uk/2021/01/magic-for-month-of-january-video-and.html