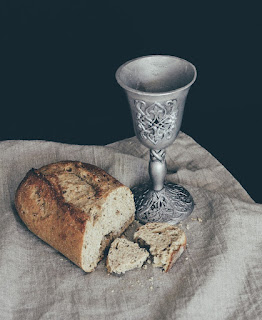 Here's an extract from a new book called Sacrifice to the Gods – by Offerings, Oblation and Libation, by traditional witch Melusine Draco. While modern pagans might offer bread and wine or cakes and ale to deities, the practice of sacrifice in history was far wider. This book looks at the subject in a factual manner.

What is the meaning of sacrifice?

Sacrifice is the offering of food, objects or the lives of animals or humans to a higher purpose - in particular divine beings - as an act of propitiation or worship. Needless to say, putting others ahead of ourselves requires sacrifice and, in more modern parlance it is the act of offering or the giving up of something we would prefer to keep.

What does it mean to make a sacrifice?

This is the act or ceremony of making an offering to a god, especially on an altar, of something that is offered as a religious act; an act of giving up something especially for the sake of someone or something else.

What is the purpose of sacrifice?

Sacrifice is a religious rite in which an object is offered to a divinity in order to establish, maintain, or restore the right relationship of a human being within the Sacred Order. It is a complex phenomenon that has been found in the earliest known forms of worship and in all parts of the world.

What are the elements of sacrifice?

It is possible to analyze the rite of sacrifice in terms of six different elements: the sacrificer, the material of the offering, the time and place of the rite, the method of sacrificing, the recipient of the sacrifice, and the motive or intention of the rite. These categories are not of equal importance and often overlap.

Where is the place of sacrifice?

The common place of sacrifice in most cults is an altar; more often it was only a pillar, a mound of earth, a stone, or a pile of stones.

What is the difference between an offering and a sacrifice?

Offering is an act of gifting or donating, while sacrifice is the offering of anything to a god as part of consecratory rite.

To the detractors of pagan beliefs, the term ‘sacrifice’ usually refers to killing animals or harming humans – because they fail to understand that in a pagan sense, what is always offered in sacrifice is, in one form or another, life itself. Sacrifice is a celebration of life, an acceptance of its divine and imperishable nature. In the act of sacrifice the consecrated ‘life’ of an offering is released as a sacred link that establishes a bond between the sacrificer and the divine power. Through sacrifice, energy is returned to its divine source, regenerating the power or strength of that source; life is fed by life. Hence the words of the ancient Roman sacrificer to his god: ‘Be thou increased (macte) by this offering’.  Needless to say, it is an increase in this divine power that is ultimately beneficial to the sacrificer because sacrifice is the merging and guarantee of the reciprocal flow of the divine life-force between its source and its embodiment. Kindred calls to kindred, blood calls to blood’

Often the act of sacrifice involves the destruction of the offering, but this destruction is not in itself the sacrifice. The destruction (or consumption) of a food-drink offering at an altar’s fire is the means by which the deity receives the offering.  Thereby, a sacrifice is the total act of offering and not merely the method in which the rite is performed.  So, sacrifice as a sacramental communal meal may involve the idea of the god as a participant in the feast, or being identified with the food consumed; it may also involve the idea of a ritual meal, at which either some agrarian event such as the springtime (Beltaine) and the harvest (Lughnasad) is repeated, or the sacred rites of the seasons are symbolically renewed – the Summer and Winter Solstices. Although the fundamental meaning of these sacrificial rites is that of affirming a bounteous and fruitful relationship with the sacred power and of establishing humankind in the Sacred Order, the rites have in more modern times assumed a multitude of different forms and intentions.

The organization of propitiatory rites in different cultures and religions has undoubtedly been influenced by a number of factors, and the importance of such factors is an aspect of sacrifice that requires examination. Nevertheless, sacrifice is not a phenomenon that can be reduced to rational terms: it is fundamentally an act of faith that has been of profound significance to individuals and social groups throughout history, a symbolic act that establishes a relationship between mankind and the Sacred Order of things. For many peoples of the world, throughout the ages, sacrifice has been at the very heart of their religious life.

Bread and wine are staples in the human diet, and have been for thousands of years across a broad range of cultures. Over time, they have accrued religious symbolism in a number of different contexts, which have in turn adapted over time. Echoes of the Christian Eucharist can be found in many of the older, more ancient forms of worship wherein bread and wine are consecrated and consumed. Bread and wine have long been used in Jewish religious practices, and over a long history, have been used as religious symbols outside of the Judeo-Christian traditions. The ancient Romans used wine as an occasional offering to their numerous gods, both in the temples and on household altars. Frequently, this took the form of a libation poured directly onto the statue of a god.

Bread and wine have also been used as an offering to deity in many traditional faiths, from ancient Egyptian temple offerings to Mithraism and Hinduism. In ancient Greece, libations most commonly consisted of watered-down wine, but sometimes pure wine was offered with bread.  In contemporary paganism, the sacrifice is often made by the ritual sharing of the traditional ‘cakes and ale’ at the end of each group meeting or solitary rite, although more recently, some neo-pagan traditions like Wicca have incorporated bread and wine into their ceremonies as symbols of the bounty of the earth.

Sacrifice to the Gods – by Offerings, Oblation and Libation is published by Ignotus Books. It is available from the printer at a special discounted price from https://www.feedaread.com/search/books.aspx?keywords=Sacrifice%20to%20the%20Gods  The Kindle ebook can be viewed on Amazon.