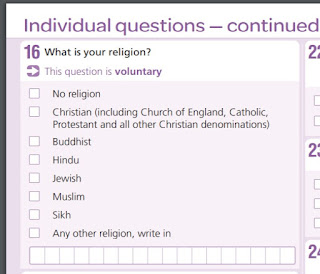 If you live in the UK, you'll be asked to fill in a national census form on 21st March 2021. The Pagan Federation is asking those who feel their religion could be classified as Pagan, to just write "Pagan" under "Any other religion" in answer to Question 16. You can see what it is likely to look like on the English form in the screen shot I took from the Office for National Statistics website.

"We’re all aware of the maxim “If you ask 10 Pagans about their path, you’ll get 11 different answers”, which is entirely valid; as a faith with one of the widest umbrella titles of all, we take pride in our paths being as individual as we are.

"However, having as many Pagans answer this question as a simple one-word answer of ‘Pagan’ is crucially important. There has been a massive growth in the number of Pagans in the last 10 years and it would be nice for this to be legitimately quantifiable. A larger number here opens up new opportunities for us and will give our community a bigger voice."

Although there has been some suggestion of a list of specific pagan paths you can choose from, the example form on the ONS site only shows space for 19 letters. At the time of the last census, 10 years ago, pagans were urged to take part in the Pagan-Dash campaign and write the word Pagan, followed by a dash, then their specific path. Examples might have included Pagan-Druid, Pagan-Wiccan or Pagan-Heathen. This time round the PF feels there is more advantage to just writing Pagan.

"The advantages to us as a community will be massive. We currently fight tirelessly to be represented professionally; from seats on Sacre educational boards and university faith panels, to government consultations and hospital and prison chaplaincies. Having a Pagan ‘Thought for the Day’ was rejected by the BBC on grounds that we don’t even total a 365th of the population; if we can demonstrate our true numbers, this could change."

If there is any more news about this, the PF has promised to post the information on its website. You can find the existing post here: https://www.paganfed.org/census-2021/

Edit: Scotland's census has been delayed until 2022 due to covid. You can find more details here: https://www.scotlandscensus.gov.uk/2022