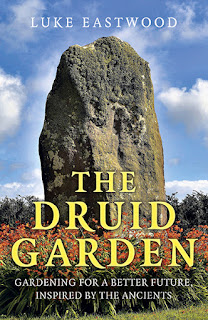 Here is an extract from a new book called The Druid Garden - Gardening for a Better Future, Inspired by the Ancients, by Luke Eastwood:

Now that it is largely accepted that humans have had, and continue to have, a huge impact on the life of this planet, we as a species are still not able to agree on how to solve this problem, now and in the future, despite huge political efforts to address the situation.

While we wait for politicians to legislate to deal with the difficulties ahead of us, the problems such as deforestation, desertification and loss of biodiversity continue to plague us and, in many cases, this worsens as time passes. Rather than just accusing the politicians of ‘fiddling while Rome burns’, which changes nothing, perhaps we all need to do more ourselves to improve the situation for both ourselves and future generations.

Part of taking an active role in bringing positive changes to a very environmentally pressured world is re-engaging or engaging far more with the natural world, in our everyday lives and this is where the Druid garden comes in.

Although we know little about what the ancient Druids did in terms of gardening, we can extrapolate their holistic world view in the context of modern Druidry. In effect, the whole world becomes a garden that needs to be tended and protected, when viewed from a modern Druidic standpoint. Of course, one does not need to be a Druid to be interested in gardens, protecting the environment and saving the planet from cataclysmic destruction. However, Druidism does offer a distinctive spiritual viewpoint and knowledge that can be incorporated into the practical actions we take. No less, Neo-Druidry often incorporates and adopts methods and practices from other cultures and spirituality where it seems appropriate to integrate them.

One does not need to be a Druid or an environmentalist to see that humanity now faces unique challenges to stop and reverse the destructive trend of the last few centuries, that has brought us to a now recognised crisis point. The actions that human beings take during the remainder of this century, and perhaps even the next few decades, appear to be crucial to the future of all life on this planet, not just human life. If indeed, as many scientists have concluded, we are now living in the Anthropocene era, we cannot just rely on nature to fix itself. We have to discover and implement creative ways to heal the damage that we have done and ensure that our future existence has minimal negative effects and far greater positive effects on the geological and biological systems that we interact with.

Obviously, technological innovation can be greatly helpful in bringing about positive results, but I do not believe this alone will save us from destroying our species and many others along with it. I sincerely believe that we have as much to learn from the past in terms of harmonious and non-destructive living as we do from the future. Many techniques and methods that have been considered obsolete, traditional or alternative are being found to be highly effective and far less destructive than much of the industrial and technological methods, that often create as many problems as they solve.

There has to be a place in our future for the spiritual as well as the technological, for the ancient as well as the modern – after all we are not just logical beings, we have physical, emotional and spiritual aspects to our existence that increasingly need to be factored into life, if we are to succeed in avoiding a dystopian future.

A holistic, integrated approach to our own immediate environment is a good starting point and this is where this book humbly intends to act as a launch pad for ideas that may be helpful in transforming our own lives and our relationship with the world of nature. Unfortunately, our understanding of the Druids’ approach to agriculture, gardening and general living is quite limited, so in neo-Druidism we are forced to ‘fill in the blanks’ as best we can. Hence, much of what I have to offer here is not Druidic in the traditional sense, although I consider it suitable to integrate with a Druid’s point of view.

I hope that this work proves to be useful to those who would describe themselves as on a Druid path, but I also hope that those who are simply interested in gardening or helping the environment will find it equally interesting and helpful too, regardless of whatever spiritual beliefs they may or may not have.

You can view The Druid Garden on Amazon. It is published by Moon Books.
Posted by Badwitch at 08:00