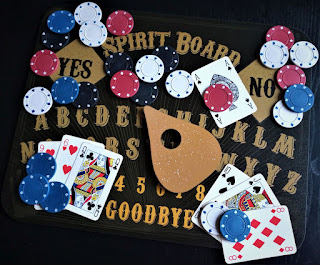 There are casinos all over the world. Las Vegas isn’t the only place that’s home to lots of land-based casinos. That’s because lots of people enjoy playing casino games. But not all casinos have a good history. Some have had tragic events and catastrophes that left a mark. These casinos are said to be haunted and anyone who dares can pay them a visit.

Nowadays, most casino games are available online. Variants of poker, blackjack, roulette, and lots of slots are available at more than one online casino. Just have a look at this webpage and you’ll see what’s on offer. Just remember to enjoy these sites responsibly.

If you’re a brave soul who isn’t afraid of haunted places, then here are some haunted casinos for you:

The Hard Rock Hotel and Casino

This is just the first of several haunted casinos. It’s based in New Jersey, in the USA, and there have been several complaints about ghost sightings. One of the most notable ones is a ghost that has a toupee and orange skin. It’s rumoured that this was a former guest who stayed on the tenth floor and committed suicide. With a skin colour like that, it’s hard to miss such a ghost.

The thing that makes Bally’s Resort and Casino haunted is the fact that it was built over another Las Vegas casino with a tragic past. The previous establishment was known as the MGM Grand Hotel and it was destroyed by a fire in the 80s. The investigation showed that 85 people lost their lives in the fire, which makes this a tragic event.

Some even jumped out of the windows to save themselves from the fire. After Bally’s Resort and Casino was built there have been sightings of groups of people running throughout the hallways, which might be the ghosts of the deceased.

The Flamingo Hotel and Casino

It’s no secret that the mob financed some of the casinos in Las Vegas and by doing so it helped build them. This meant that they had a nice share of the profit. The Flamingo Hotel and Casino is one such establishment. Bugsy Siegel is the notorious made man that was behind this casino. Back in his day, he was a force to be reckoned with.

He was known for his brutality and an exquisite choice of clothes. In other words, he was a dapper gangster who you didn’t want to be on the bad side of. His brutal way of life led to his death. But he was so tied to the hotel that his ghost decided to stay.

Both guests and staff have reported seeing Bugsy around the hotel. His memorial is one of the places he appears in, as is the Presidential Suite in the hotel. He was also seen near the wedding chapel, which was the place where his apartment used to be.

These are only some of the haunted casinos of the world. Naturally, there are many more, and if you know of one, do leave a comment. It is always worthwhile checking to see if a hotel has a ghostly reputation if you’re easily scared, since staying in a haunted bedroom is not for the faint-hearted.