Jokers and their Meaning in Cards and Cartomancy 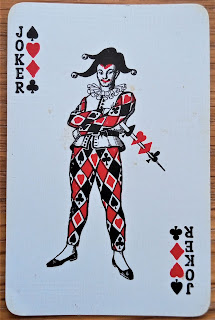 What's the point of Jokers? I'm writing about the kind of Jokers that are standard in most packs of ordinary playing cards rather than pranksters, of course. I'm also mostly going to be writing about their meaning in cartomancy - using playing cards for divination - but I'll start by looking at when they first appeared for playing games.

Before the mid 19th century, few if any decks of playing cards had more than the suits of hearts, diamonds, clubs and spades with their court cards. Jokers were created as a trump for the game of Euchre and since then have been used as trumps or wild cards in other games including Poker, Canasta and forms of Rummy.

If you're doing divination with regular playing cards, then the Joker is most obviously likened to the Fool, but is also quite similar to the Magician, who is sometimes a trickster. Some people believe the Joker actually derives from the Fool and was the last Major Arcana left in decks of playing cards when they separated in use from older tarot sets. There isn't a great deal of evidence to support that, however, and many cartomancers take the Joker out and read using the regular cards.

In fact, some books on cartomancy - particularly older ones - don't give definitions for the Joker at all. For example, my copy of Everybody's Book of Fate and Fortune dated 1935, doesn't mention the Joker. More recent books do give definitions. Nerys Dee, in Fortune Telling by Playing Cards, describes the Joker as representing untapped potential, and writes:

"This card symbolizes individual potential latent within each of us... On the surface this appears as the innocence of a child, the wisdom of Job, ...stupidity or pure tomfoolery, but whichever it is it has the power to deceive and take others by surprise."

The Joker can represent eccentric genius, a psychic awakening, surprises and unexpected changes in fortune. If you are using a deck with more than one style of Joker, then red cards are generally seen as representing good fortune, and blue or black cards indicate problems to be faced.

You can listen to me talk more about tricksters and fools in Facebook Live here.

You can view Fortune Telling by Playing Cards on Amazon.