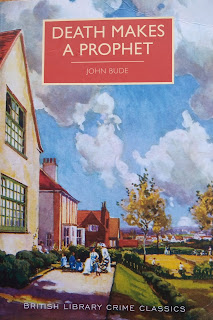 I had my Covid jab on Saturday and felt a bit grotty afterwards so treated myself to a day of reading fiction on the sofa. Some time ago I'd picked up a British Library Crime Classic called Death Makes a Prophet, by John Bude. The description on the back suggested I'd find it entertaining:

'Welworth Garden City in the 1940s is a forward-thinking town where free spirits find a home - vegetarians, socialists, and an array of exotic religious groups. Chief among these are the Children of Osiris, led by the eccentric High Prophet, Eustace K. Mildmann. The cult is a seething hotbed of petty resentment, jealousy and dark secrets - which eventually lead to murder. The stage is set for one of Inspector Meredith's most bizarre and exacting cases. This witty crime novel by a writer on top form is a neglected classic of British crime fiction.'

The murder mystery was originally published in 1947 but was republished in 2017 in the British Library series that offers new readers a chance to discover old books that have been out of print for some time and largely forgotten. As you can probably guess, what appealed to me was that this novel is set amid a group of modern-day pagans, the fictional Children of Osiris.

I really enjoyed the first few chapters, which offer a humorous look at the politics, cliquiness and infighting between the leaders of the religious movement. However, as I got further into the novel I felt more and more uncomfortable about its use of racist stereotypes, terms and references. Of course, back in 1947, those words and types of descriptions were not unusual - even though they would still have been found offensive by people of colour and other ethnic groups. The book didn't need them. The plot would have worked fine if the racist bits were removed or changed. I guess the modern editor decided it was better to leave the book as it was originally, warts and all. What surprised me more was that the introduction, written especially for this new edition, didn't mention that there were problematic issues of that nature with the book.

But what do you think? Should old books with racist terms be left forgotten, should new editions be edited to remove racist content, or should such problematic material be clearly mentioned at the beginning, but the text itself left unchanged?  Do leave a comment.

You can view Death Makes a Prophet on Amazon.

Hmmm... Leaving it as it is means it is representative of attitudes at the time, but yes, there needs to be a disclaimer at the beginning to warn people, in case anyone thinks it's supposed to be some sort of role model. I would hope most readers would be intelligent enough to pick out the nasty bits and make up their own minds, but there will always be one or two who don't, or who may take offence. Talking Pictures TV put this sort of disclaimer at the beginning of some of their programmes from the 60's and 70's, because some of them contained racist and discriminatory comments and attitudes that can't be edited out, so I guess that's the way to deal with it.

Leave the content ‘as is’ with a disclaimer, like selling cigarettes with pictures of not-so-cool-anymore smoking related illnesses on the packaging. If the past was as politically correct as a new censored edition wishes it was, our present might not be as it really is.

Publish with a disclaimer. We need that written record of just how bad (racial)things were. As each generation matures, we (hopefully) will put the past behind us. Yet, the future generations need to know 'what the norm' was and how truly awful it really was.This goes for racism, women's rights, ecology, etc.(the list is never ending it seems.) There are a number of books and movies (here in the USA) that are read at different points in the classroom just to start the conversation on racism and equal rights...compare and contrast to then vs now. Trying to rewrite History just hides the sad ugly truth.