Vote to Pick a Name for Tower of London Raven 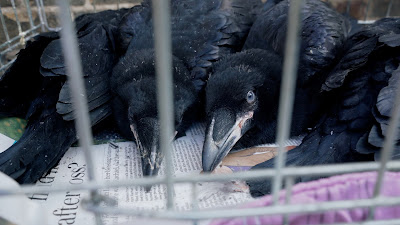 As guardians of the Tower of London, legend has it that should the ravens leave, the kingdom would fall. As the palace, prison and fortress prepares to reopen following a 5-month closure, two new residents will be among those welcoming visitors back; a pair of baby ravens born during lockdown (pictured above). The first - a male - has been named Edgar, while the second – a female – is still in need of a name, and the Tower of London is asking the public to help select a suitable one.
Until 18 May, people around the world will be able to pick their favourite name from a shortlist drawn up by the Tower’s Ravenmaster, offering a chance to have their say on the whether the chick should be named in honour of a medieval queen (Matilda), a legendary nurse (Florence), or a figure from Celtic mythology (Branwen) among others. The poll is hosted on the website of Historic Royal Palaces – the independent charity which cares for the Tower of London and its ravens – at http://bit.ly/NameOurRaven with the name receiving the most votes to be announced as part of the landmark’s reopening on 19 May. 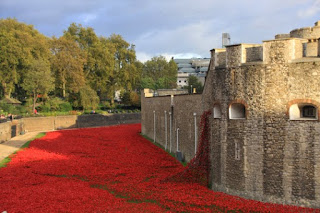 Edgar and his sister are two of four chicks born in March this year to the Tower’s resident breeding pair, Huginn and Muninn, who take their names from the ravens of the Norse god Odin. Huginn and Muninn are also the parents of two other of the Tower’s resident ravens; Poppy, named for the Tower’s famous 2014 display (pictured right), and Georgie, born at the Tower on St George’s Day in 2019.
The arrival of this feathered duo takes the number of ravens within the Tower walls to nine, three more than decreed by King Charles II over 300 years ago. Charles is thought to have been the first monarch to insist that the ravens of the Tower be protected, after he was warned that the crown and the Tower itself would fall if they left. Ever since, a minimum of six ravens have traditionally been kept at the famous fortress, serving as something of a national insurance policy.
The chicks are the result of the Tower of London’s successful raven breeding programme, started in in 2019 with the ambition of securing the future of the Tower’s corvid community. With raven accommodation at the Tower now full, the two other chicks born in March will go to new homes outside the capital, so as to ensure that the line of Tower ravens continues for generations to come. As the newest members of the conspiracy – the collective noun for a group of ravens - Edgar and his sister will get to enjoy a diet as gory as the site’s legendary history, with a menu of raw meat brought fresh from Smithfield market by the Ravenmaster, alongside an egg a week and even the occasional rabbit for good measure, supplied to the ravens whole as both food and entertainment.

Edgar, named in tribute to poet Edgar Allan Poe, whose poem ‘The Raven’ was first published in 1845 – the year that the building now housing the Crown Jewels was constructed - is the first Tower raven to bear this name in almost 100 years. While there is no convention governing the naming of the Tower’s ravens, traditionally they were named in honour of the person who had gifted them, with the last chick called Edgar being offered by an Edgar Sopper in 1923. After integrating well, he was subsequently dismissed from the Tower for bad behaviour.
Yeoman Warder Chris Skaife, Ravenmaster of the Tower of London, said: ‘We’re delighted to have two new chicks joining the raven community here at the Tower. There’s a lot of pressure when picking names for these famous feathered residents, so I hope that people around the world will help us to name our newest addition, and come and see them in person as they settle into their new home!’
The 5 shortlisted names, with the definitions supplied by Historic Royal Palaces, are:
HM Tower of London is scheduled to reopen to visitors on Wednesday 19 May 2021. For more information visit www.hrp.org.uk/tower-of-london. Tickets prices are: Adult £29.90/ Concession £24 / Child £14.90 / free for Historic Royal Palaces members (pre-booking is essential)

An excellent book about the history of ravens in London and at the Tower is City of Ravens by Boria Sax, you can read my review here.
Posted by Badwitch at 08:00