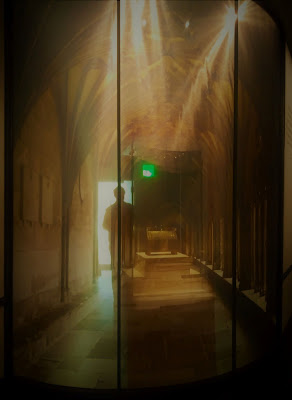 At the Thomas Becket exhibition at the British Museum there are several items on display relating to the saint that people believed had miraculous powers.
After his death, people at the time thought objects associated with him could offer supernatural aid. Fragments of his clothing or pieces of his bone, held in ornate reliquaries, were famed for their healing properties. Pilgrims bought badges, partly as souvenirs of visits to holy places, but also as amulets of protection or as ways of channeling the power from the site after they had left. One particularly strange, and to modern eyes gruesome, custom related to the saint was St Thomas Water. This was his blood mixed with water, put into little flasks that his cult followers drank or soaked onto bandages as a cure-all. But are these things Christian miracles, or are they really more like medieval magic?

It is quite easy, as a modern pagan, to think there's a clear divide between magic, as in spellwork, and Christian miracles, but when you consider both to be supernatural ways of creating change in the material world, they aren't so different. We might wear a specific crystal or burn a certain colour candle, holding the view that a mixture of the properties of the object plus our own will or belief have the power to make what we want happen. A medieval member of the cult of St Thomas might wear their pilgrim badge or burn a candle to the saint holding the view that the properties of the object and their own faith would heal them or protect them. Not really so very different at all.

The picture on this post is one I took at the Becket exhibition, and shows a reliquary viewed through a translucent screen that creates a beautiful illusion of Canterbury Cathedral. I really enjoyed the exhibition, which covers the life of Thomas Becket as well as giving a glimpse into what London was like at the time. It relates the story of his murder, using objects and an animated display, then looks at changing attitudes towards the man, rebel and saint. You can find out more here: https://www.britishmuseum.org/exhibitions/thomas-becket-murder-and-making-saint

Loved this post and I totally agree with you.