Celtic Lore: How Brigit Became a Bishop, by Mael Brigde 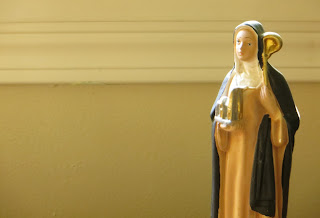 Here is a wonderful look at a story about Brigit, in a blog post written by Mael Brigde

Brigit the goddess has few stories in the lore, and the ones she has are brief but rich. Brigit the saint, on the other hand, is blessed with many stories, both in her Lives, written by monastics to tell of her miracles and teach Christian beliefs, and in the folk tales told among her people.

Many of these stories appeal to me, often because of the great spirit they reveal. They depict a woman who steps outside of her “natural” female role, one with great compassion and urgency in her desire to assist the injured and oppressed, a stubborn woman who gets what she needs, as when Ailill, the king of Leinster, denies her some of his timber to build her house at Kildare. He finds his horses’ feet unable to move until he offloads not some, but the entire hundred horse-loads for her.1

The poem “Ordination of Brigit, Bishop,” from my book A Brigit of Ireland Devotional – Sun Among Stars, refers to the story of Brigit taking her vows as a nun and being consecrated a bishop, instead. This gives her and her abbess descendants greater powers and privileges than those of any other Irish nun. Unlike many miracle stories, this one has some basis in history. Until the rape of the abbess of Kildare in 1132, these women did indeed hold greater powers than other women religious in Ireland.

I made an error in my book (!), when I attributed this story of Brigit’s ordination as a bishop to Cogitosus. Both his Life of Brigit (Vita Sanctae Brigitae) and Vita Prima Sanctae Brigitae refer to the greening of the altar when she took the veil, but it is in Bethu Brigte and Leabhar Breac that we find her elevated above normal rank.

In Cogitosus’s Vita Sanctae Brigitae, written not much later than 650 CE2, her hand touches the base of the altar, which becomes living wood:

Of the Greenwood Pedestal and Altar Base

Shortly afterwards, when her parents wanted to betroth her to a man according to the custom of the world, Brigit, inspired from above and wanting to devote herself as a chaste virgin to God, went to the most holy bishop Mac Caille of blessed memory. Seeing her heavenly desire and modesty and seeing so great a love of chastity in this remarkable maiden, he placed the white veil and white garment over her venerable head. 2. Kneeling humbly before God and the bishop as well as before the altar and offering her virginal crown to almighty God, she touched with her hand the wooden base on which the altar rested. 3. And to commemorate her unsullied virtue, this wood flourishes fresh and green to the present day as if it had not been cut down and stripped of its bark but was attached to its roots. And to this day it rids all the faithful of afflictions and diseases.

Vita Prima Sanctae Brigitae, written in the 8th or late 9th century3, retains the greening of the altar and adds a pillar of flame arising from Saint Brigit’s head as she awaits the veil. Here MacCaille is demoted from bishop and Mel takes his place4:

1 Then saint Brigit taking three nuns with her went to the territory of the Ui Neill to the two holy bishops, Mel and Melchu, who were disciples of St Patrick and lived in the towns of Mide. And they had a certain disciple called Mac Caille who said to Mel, ‘Look, there are holy virgins outside who wish to receive the veil of virginity from your hands.’

2 Then he ushered them into the bishop’s presence, and while bishop Mel was gazing intently at them, a column of fire suddenly appeared rising from Brigit’s head up to the very top of the church in which she dwelt.

By the time of Leabhar Breac, of the 15th century, the story has changed dramatically:

3. Brigit, and certain virgins with her, went to Bishop Mél, in Telcha Mide, to take the veil. Glad was he thereat. For humbleness Brigit staid, so that she might be the last to whom the veil should be given. A fiery pillar arose from her head to the ridgepole of the church. Bishop Mél asked: ‘What virgin is there?’ Answered MacCaille: ‘That is Brigit,’ saith he. ‘Come thou, O holy Brigit,’ saith Bishop Mél, ‘that the veil may be sained on thy head before other virgins.’

It came to pass then, through the grace of the Holy Ghost, that the form of ordaining a bishop was read over Brigit. MacCaille said that ‘The order of a bishop should not be (conferred) on a woman.’ Dixit5 Bishop Mél: ‘No power have I in this matter, inasmuch as by God hath been given unto her this honour beyond every woman.’ Hence, it is that the men of Ireland give the honour of bishop to Brigit’s successor.

But the much older Bethu Brigte, of perhaps the 9th century, tells the story in the greatest detail of all.6

On a certain day she goes with seven virgins to take the veil to a foundation on the side of Cróchán of Bri Éile, where she thought that Mel the bishop dwelt. There she greets two virgins, Tol and Etol, who dwelt there. They said: ‘The bishop is not here, but in the churches of Mag Taulach.’ While saying this they behold a youth called Mac Caille, a pupil of Mel the bishop. They asked him to lead them to the bishop. He said: ‘The way is trackless, with marshes, deserts, bogs and pools.’ The saint said: ‘Extricate us [from our difficulty].’ As they proceeded on their way, he could see afterwards a straight bridge there.

The hour of consecration having arrived, the veil was raised by angels from the hand of Mac Caille, the minister, and is placed on the head of saint Brigit. Bent down moreover during the prayers she held the ash beam which supported the altar. It was afterwards changed into acacia, which is neither consumed by fire nor does it grow old through centuries. Three times the church was burned down, but the beam remained intact under the ashes.

The bishop being intoxicated with the grace of God there did not recognise what he was reciting from his book, for he consecrated Brigit with the orders of a bishop. ‘This virgin alone in Ireland’, said Mel, ‘will hold the Episcopal ordination.’ While she was being consecrated a fiery column ascended from her head.

Exactly when Brigit’s abbess descendants gained their special powers, I cannot say. Cogitosus, believed to be a monk at Kildare perhaps a century after her death, doesn’t mention it. In his Life, she seeks out a bishop for her monastery, demonstrating her inability to perform that role. Perhaps the story arose in the 9th century, when Viking raids were violently impacting Irish society, to explain or perhaps even to create their extraordinary privilege.

I got nerdier in this blog post than I’d intended. I planned to give you the short version (Saint Brigit is made a bishop) and leave it at that. But I became curious about the different stories her four major Lives tell regarding her taking the veil – the diversity of which explains why I was confused about where and how the story was told. I hope you have enjoyed delving into the stories that inspired the poem. Now, the poem that inspired the post.

priest speaks quickly
words not under his control

May Brigit, Bishop bless us with the greenness of life in all our dead and dying places. May we be made new again.

Image: “Saint Brigit with her Bishop’s Crozier and Church” by Mael Brigde

1 On the Life of St. Brigit (Leabhar Breac).
2 Seán Connolly and Jean-Michel Picard (1987): pg. 5.
3 Connolly, Seán, “The authorship and manuscript tradition of Vita I sanctae Brigitae”, Manuscripta 16:2 (July, 1972): 67–82. It is confusing that this text is called “Prima,” meaning it is the first of her Lives, but you will get used to it. As in all disciplines, ideas can change, and Cogitosus’ Life is now generally considered the older of the two.
4 This may have something to do with the competition between Patrick’s Armagh and Brigit’s Kildare in becoming the ecclesiastical head of Ireland. But we won’t worry about that here. If you are interested, look up Lisa Bitel’s Landscape with Two Saints: How Genovefa of Paris and Brigit of Kildare Built Christianity in Barbarian Europe. Oxford University Press (2009).
5 Dixit = uttered
6 Notice that here the original bishop, Mac Caille, is not only reduced in rank from bishop, but relegated to the status of pupil, and youth.

Bethu Brigte or the “Irish Life of Saint Brigit:”

Mael Brigde is a devotee of the Irish goddess and saint, Brigit, and the founder of the Daughters of the Flame, which has tended Brigit’s flame since Imbolc 1993. She publishes a general interest Brigit blog, Brigit’s Sparkling Flame, and a Brigit poetry blog, Stone on the Belly. She teaches courses and webinars on Brigit. Her book, A Brigit of Ireland Devotional – Sun Among Stars is available for pre-order.

Thank you for this very interesting post, Lucya. I am drawn to Brigid partly because of my Catholic beginnings and partly because I used to work in the jewellery trade, with lots of fire and metal. My Dad and Grandad made surgical instruments - again more fire and metal, so it's in the blood!

My Catholic youth has a lot to do with my attraction to her, too. She combines both the familiar and what I was seeking beyond that familiar.

I love your connection to fire and metal. Beautiful.

Yes, I agree. I also had a Catholic background and like the fact that Brigid can be viewed as an aspect of the divine feminine in both Christianity and Paganism

Dear Mael
That was a wonderful read. I love the poem as it really connected it all together and I can appreciate it more.