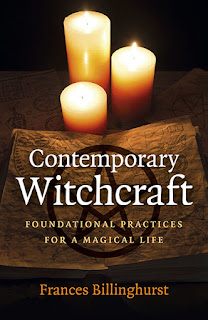 Here's an extract from an inspiring new book called Contemporary Witchcraft: Foundational Practices for a Magical Life, by Frances Billinghurst:

It was in the early 1990s that I took my first steps into the world of contemporary witchcraft (then generally mispronouncing the Anglo-Saxon word as “Wicca”).  Back then, the neophyte (beginner) was expected to learn how to render the “veils” between this world and the mystical one by applying themselves to the work in order to understand these mysteries. My initial instruction not only focused on the practical application of ritual and magick, but also the “behind the scenes” information, providing an insight into the psychological changes, as well as what is actually happening on the astral level, the inner planes. It was this understanding that enabled me to gain a stronger belief in the magical work that I was undertaking – a belief that also proved to be most beneficial during dark nights of the soul, the times of doubt when the logical mind saw me questioning what I had been dedicating much of my adult life to.

These days Wicca has almost become a generalised term for a religious form of neo-paganism, which often also includes an assortment of New Age practices, as opposed to focusing on the initiatory teachings that stem from the vision that the man who instigated the revival of witchcraft, Gerald Gardner, and later, Alex Sanders, had. There are also internet platforms that if you mention that you are a “religious witch”, ie believing in a God and a Goddess as both Gardner and Sanders did, it won’t take long before someone asserts that you are not.  “Real” witchcraft today seems to include a fetish for skulls, jar candles and moon water, none of these things were mentioned to me back in the 1990s, and without any hint of worshipping “the Other”.

Watching these changes occur, it seems that what is often depicted today as “Wicca”, bears little resemblance to what I was trained in and what my practice involves today.  While there are traditional “Wiccans” who continue to classify themselves as such, the term I personally prefer to use to describe what I do is “contemporary witchcraft”.  I have to confess that there are times where what is referred to as “witchcraft” has also sent my eyes rolling as well.

I am the first to admit that I don’t own the word “witch”, “witchcraft” or even “Wicca”. What I do know is that the training that I undertook some nearly 30 years ago, still holds me in good stead today.  I am somewhat saddened that despite what seems to be a copious amount of information available today, much tends to be the same material regurgitated without any real instruction as to why or even how certain techniques are done, let alone any form of acknowledgment as to where the information was originally obtained.  The social media influencers seem to merely encourage their followers to simply smudge away all their issues and problems, which has resulted in California and Black Sage becoming listed as endangered plant species.

There also seems to be an increasing belief of “anything goes” and “do what you feel”, resulting very much in a self-styled form of witchcraft with an emphasis on aesthetics using one’s own intuition, as opposed to older practice of establishing foundational work and being aware of any pending reaction or consequences to your magick.

It is for these reasons that I decided to write Contemporary Witchcraft: Foundational Practices for a Magical Life.  I wanted to cover the foundational practices that appear to be missing in a lot of modern books that focus mainly on spellcasting.  While you do not need to cast circle and honour the Gods in order to create spells and perform magick, the teachings found within contemporary witchcraft can take your own interpretation of the Craft to a deeper level.

Frances Billinghurst is the also author of Dancing the Sacred Wheel, In Her Sacred Name: Writings on the Divine Feminine, Call of the God: An Anthology Exploring the Divine Masculine within Modern Paganism and Encountering the Dark Goddess: A Journey into the Shadow Realms. When she is not writing, Frances is the founder of the Temple of the Dark Moon (Adelaide, Australia), principal healer for the Isian Centre of Metaphysics and designs devotional beads and sources other products for her Esty store, LunaNoire Creations. She can be contacted through the Temple of the Dark Moon’s website (www.templedarkmoon.com) or her writer’s blog (http://francesbillinghurst.blogspot.com.au).

You can view Contemporary Witchcraft on Amazon and at publisher Moon Books' website.

Jane, I totally agree with you. Moon water definitely has its uses. Also jar candles and skulls! The opinions in the book are not necessarily my own opinions. Mind you, when I was trained in Wicca decades ago, we didn't make moon water, and jar candles didn't really exist in the UK (although they did in the US and in Italy where they were sold to put on graves as memorials that would burn for an entire week until the next visit). Things change. Moon water and jar candles might be a relatively new introduction to witchcraft practice in England, but they are a very useful introduction!

You bet, Lucya! I filled a pot with compost and watered it with Samhain Blue Moon water, and now we've got tomatoes, even though I didn't sow any seeds. I know you invariably get tomatoes from home made compost, but I always like to see the magic in things!