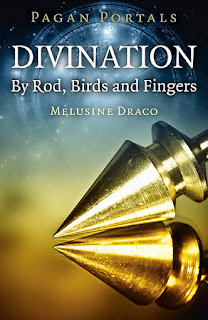 Here's an extract from Melusine Draco's book Pagan Portals - Divination. This section is on the use of pendulums:

The Power of the Pendulum

My fingers are best suited to cleidomancy and over the years I have experimented with numerous different types and sizes of pendulum made of different materials. Magically a pendulum is a weight suspended from a pivotal cord or chain so that it can swing freely; scientifically when a pendulum is displaced sideways from its resting, equilibrium position, it is subject to a restoring force due to gravity that will accelerate it back toward the equilibrium position.  Generally speaking, a pendulum is a small weight on a cord or chain. And that’s all it is! It can be any weight, and it can be any sort of cord or chain. The pendulum itself is more often than not, an object only about ½ inch by 1 inch in size and the cord or string is about 8 inches long; the whole thing fitting easily in a small pocket or pouch.

Like dowsing with hazel twigs, from earliest times, pendulums have been used to locate water, gold, gems, and other valuable commodities – as well as missing items. In Europe early scientists and doctors would consult a pendulum for medical diagnosis to locate infections and weak areas of the body and to determine the gender of unborn infants. In the practice of radiesthesia, a pendulum is used today for medical diagnosis.

People also trust the pendulum enough to let it guide them through the most difficult times of their lives. For an extreme example, during WWII, a pendulum was used by Colonel Kenneth Merrylees to locate deeply buried bombs. He was employed by the Army to dowse water supplies for Allied troops at the front, and also worked as a bomb disposal expert back home, where he used his dowsing skills to find unexploded bombs with delayed-action fuses that had penetrated deep into the ground; famously locating one 500-pounder under the swimming pool at Buckingham Palace. Even the most hard-bitten sceptic is not going dismiss the Colonel’s remarkable abilities with his pendulum!

Another advocate of The Power of the Pendulum (published in 1976) was T.C. Lethbridge, an English archaeologist, parapsychologist, and explorer. A specialist in Anglo-Saxon archaeology, he served as honorary Keeper of Anglo-Saxon Antiquities at the Cambridge University Museum of Archaeology and Ethnology and over the course of his lifetime wrote twenty-four books on various subjects, becoming particularly well known for his dowsing and other experiments with a pendulum.

It is usual practice to first determine the response you will be using: (i.e. left-right, up-down); which will indicate ‘yes’ and which ‘no’ before proceeding to ask the pendulum specific questions.  The pendulum may also be held over a pad or cloth with ‘yes’ and ‘no’ written on it, or perhaps other words written in a circle. The person holding the pendulum aims to hold it as steadily as possible over the center and its movements are believed to indicate answers to the questions. Repeatedly asking the same question should be avoided as pendulums have been known to become ratty and climb up the cord like a snake about to strike!

Quite simply, when held correctly, the pendulum reacts to very small nerve reactions in our fingers that are generated by our unconscious mind in response to a question. Different nerve reactions will be detected depending on what our subconscious mind knows. These reactions are transmitted to our fingers from the deep recesses of the mind and through our fingers to the cord holding the weight of the pendulum. These tiny nerve transmissions affect the cord and are then transmitted to the weight - causing it to move in some direction. So rid yourself of the myth that a pendulum is moved by some spirit, or by magic - it is moved by our subconscious mind …

… and yet! There is a certain amount of magic in the ability to interpret some of the reactions.  I have found that the best results come from a pendulum with some quartz content since this is the mineral that ‘earths’ our magical abilities and makes the link with those chthonic energies that set the pendulum swinging … backwards and forwards for ‘yes’ … in a circle for ‘no’ … although others may use the opposite interpretation.  We make sure we’re on the same wavelength by uttering a simple incantation like: ‘Adonai, please answer my questions. Swing backwards and forwards for ‘yes’ or in a circle for ‘no’.  I thank you’. 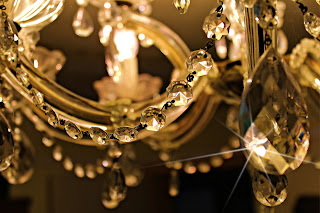 My personal pendulum is a heavy crystal droplet from an old chandelier. Despite its name, ‘crystal’ is actually glass containing a minimum of twenty-four per cent lead. Not present in other types of glassware, the lead increases the sparkle and makes it easier to cut; the brilliance of lead crystal relies on the high reflective qualities caused by this lead content.  Although these droplets are manufactured there is still enough lead content to link us with the earth and its magical correspondences. I also use a heavy pendulum because it takes more than a slight nervous reaction to set it swinging, and also for it to change from swinging backwards and forwards, to rotating in a circle without any detectable sensation of movement within the hand in response to my questions.

In addition, in alchemy lead is known as the silent metal. It is a law unto itself and in magic creates a space of silence; this is the perfect metal for ‘infinite space’ meditations, making an effective barrier against all forms of negative energy. Ruled by Saturn, the magical use of lead promotes contact with deep unconscious levels (both the underworld and Otherworld), deep meditation, banishing negativity breaking bad habits and addictions, protection, stability, grounding, solidity, perseverance, concentration and conservation.

The magical correspondences also include: the astrological houses of Capricorn and Aquarius; Chronos, the father of Time; the Universe in the Major Arcana; the colours black and blue-black; magical powers of malediction and death (since lead is highly toxic), alchemy and geomancy; perfumes – all dull and heavy odours including sulphur and asafoetida.

It is not surprising, therefore that a ‘crystal’ pendulum with its high lead content makes the perfect tool for divinatory work. For the record, my second choice would be a clear quartz crystal with bands of rutile since quartz (in all its forms) is the most magical mineral on the planet. Although in magical circles we are warned to ‘never haggle over a black egg’, a large droplet from a broken down chandelier  can be obtained for a few pounds off e-Bay, while a decent sized quartz/rutile pendant could have set me back over £100.

Let’s face it, divination is both a skill and an arte but an individual’s proficiency depends on regular practice just as much as his or her natural abilities. Most witches do, of course, have a particular favourite divining tool, which acts as a prompt for tuning in to psychic forces and if you already have a favourite method, then there is absolutely no reason to change. Just as the good all-rounder is rare in any walk of life, so the witch who can divine by using every tool imaginable is a rare animal indeed!   In addition, there are also different types of ‘tool’. For example, there now are hundreds of different Tarot packs to choose from and it won’t be until you find the design that ‘talks’ to you that you will excel in spontaneous tarot readings for yourself.

As with all elements of Craft the more we understand about the history and antecedents of our chosen divinatory method, the easier it becomes to instantly get onto our ‘contacts’ regardless of the technique we are using. It isn’t enough to buy a modern book off Amazon and slavishly follow the directions. We need to understand the history behind the system and to discover where it has travelled from to re-emerge in 21st century western esoteric writing. We need to re-connect with the ancient seers, shaman and augers of the ancient world

You can view Pagan Portals: Divination on Amazon. It is by Melusine Draco is published by Moon Books. Chandelier photo credit: Pixabay

Wow! This is interesting, Lucya. And timely too. I bought a turquoise pendulum at the Romford Moote on Tuesday night.

Hi Jane - brilliant! Your pendulum sounds great - hope it works well for you!