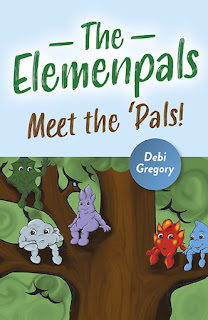 Here's an interview with Debi Gregory, Pagan Federation Community Award Winner 2020 and author of a book for Pagan children called The Elemenpals.

Q: I understand that The Elemenpals is a children’s book with a story about woodland creatures, which teaches about the elements and caring for Mother Earth. Can you tell me a bit more about it?

A: So, the Pals are essentially the children of the elements. There’s a lot of narrative out there about elemental beings and their power and whatnot but very little about any juvenile, learning years. So this is the Pals learning about the Earth and her children, creatures and all of nature. The book is essentially the introduction into their stories and the world they inhabit.

Q: What inspired you to write it?

A: My daughter, when she was about seven. She’s autistic and we’ve struggled with her sleeping patterns her whole life. In the process of trying out various bed time routines and stories that enhance a feeling of peace and sleepiness, she asked me if there were any stories about people like her, but all the ones I found including neurominority children were very chaotic. They were stereotyped and didn’t actually represent who she is at all, so I started telling her about these little elemental imps. One of the characters, Menme, is non-verbal and autistic and one character, Gwynt, has ADHD and communication difficulties, but none of this is explicitly stated in the book. It’s not a plot point, it’s just who they are. Menme speaks with hands and expression and Gwynt is easily frustrated when words are needed. So my daughter now had characters that reflected her and her cousin and her brother but who just fit in, without needing to explain or justify them.

Q: How would you describe your Pagan path and how does that influence your writing?

A: I’ve been Pagan for a little over twenty years now and I’ve explored it all from Wicca to Heathenry and everything between. I don’t tend to divulge exactly what my personal practice is as I feel it’s private but there’s definitely some aspects of Witchcraft, Druidry, Animism and Heathenry, to reflect who I am, reflect my ancestors and my creative expression and also my affinity with science.

Q: You are very active in the pagan community, championing inclusivity and dealing with social media for the charity Pagan Aid. Can you tell me a bit more about your work in those areas?

A: I worked for the Pagan Federation for around six years and I helped them to create many of their resources for supporting marginalised Pagans, which they still use now. I try to run the social media for Pagan Aid, which funds projects that fight poverty in Earth-friendly ways, but I’ve found myself very busy so I’m looking for people to help me expand that team across the various social media platforms.

PaganAid is the only charity of its kind in the community and we fund projects across the whole world such as our latest one to aid the conservation of the Amazon rainforest.

Q: What would be your top advice for Pagan parents and for young people and children who are interested in Paganism?

A: I would say read everything but take it all with a pinch of salt. There are so many folk coming to Paganism right now after watching modern televised versions of historical or fantasy narratives and that’s fine, whatever resonates with you. It was certainly that way for many of the people I’ve met. But that can lead to a very superficial and limited understanding of the faith community. Immerse yourself in it! There are so many books, blogs, podcasts and groups out there full of information. Just devour it all and then take out what resonates with you personally because the only person who has to answer for your beliefs to yourself and any deities you may devote yourself to is you. It’s all about your growth and your spiritual enrichment.

For parents, I would say to stand back and watch the kids work. Children are smart, insightful and adventurous by their very nature, it’s how their brains are wired. They may not all be adventurous or express their knowledge and excitement in the same way but it’s still there, and giving them the room to grow without too much interference is actually the best thing you can do. Just give them the opportunities they need to experience as much as possible and their miraculous minds will do the rest! I always say that we can learn as much from our children as they can learn from us and, as told by Vygotsky, children are active agents in their own learning. We just need to encourage that as best we can.

Q: What are you working towards at the moment?

A: Mostly I’m just focusing on my academics. I’m doing a lot of work with my university and others in supporting neurominority students and it’s taking up a lot of my time. Not very exciting in terms of the Pagan community though, I’m afraid.

Q: Do you have any plans to write another book in the future, and if so what topic?

A: I have seven other Elemenpals books already written and have been considering my publishing options. I also have a project in the works with my dear friend Mabh Savage. We’re exploring the ways that our faith and faith community can support parenting and family life and what we can learn from our faith culture and heritage to enrich our families as we develop, both as parents and as individuals. So that’s rather exciting!

Q: Is there anything else you would like to say?

A: It’s really important to me that people recognise that the book is more than a simple story. It’s been written specifically with child development in mind, empowering children to take control of the narrative and engendering a feeling of personal ownership for the reader. The characters are diverse and left ambiguous at the same time, to allow readers to put their own world into that world and bring them together. With this book and the sequels, the children are in charge and that’s a gift that all children should have.

You can view The Elemenpals on Amazon and on publisher Moon Books' website.