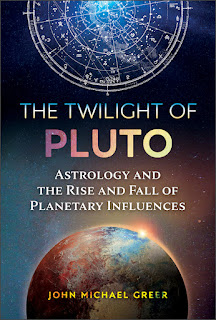 Here's an excerpt from the new book The Twilight of Pluto: Astrology and the Rise and Fall of Planetary Influences by John Michael Greer:

The decision that assigned Pluto a new status, the meeting at which it took place, and the actions of each of the astronomers present in Prague that day, were all part of the fabric of the universe, shaped by intersecting patterns of influence that can also be read in the heavens by those who know how to do so. The decision of the IAU was thus as much a part of the natural unfolding of the cosmos as the discovery of Pluto had been, and it reflects a comparable watershed in the collective consciousness of our species. If this is true, as astrologers believe, then the astrological influence of Pluto--that peculiarly modern planet--was a temporary phenomenon, not a permanent one, and a great many of the characteristic expressions of Pluto’s influence can be expected to lose much of their importance as the influence of the former planet fades out. As that happens, a great many of the certainties of the present time are likely to dissolve around us.

It’s crucial, to make sense of what follows, not to misunderstand the core thesis of this book. I am not suggesting that Pluto never was a planet, and that astrologers were wrong to take it into account in their work. Quite the contrary, I’m suggesting that from 1930 to 2006, Pluto was a planet, in every sense that is meaningful to astrologers. Its influence in the horoscopes and other astrological charts that were cast and interpreted during those years was just as important as astrologers thought it was, as important as that of any of the other planets. What’s more, as we’ll see, the influence of Pluto began to be felt in human society for roughly thirty years before it was discovered--approximately one Saturn cycle--and will continue to have an effect disproportionate to its size, though gradually declining in power, for about thirty years after its relegation to the status of dwarf planet.

After that, it will have roughly the same influence on horoscopes and other astrological charts as the other members of the category of dwarf planets: as significant, say, as Ceres, the largest of the asteroids. There will still be a place for it in astrology, in other words, just as there’s a place for the larger asteroids, Kuiper Belt objects, and other small bodies. The only difference is that it will no longer be the potent force that it was during the Plutonian Era, the period when it functioned astrologically as a planet.

It’s also crucial in this context to recall that Pluto’s case is not unique. The planets Uranus and Neptune, which were discovered in modern times, show how planetary influences can emerge from the celestial backdrop, but there are other bodies that traced out both ends of Pluto’s trajectory through time. Ceres, the dwarf planet just mentioned, had a similar career as a planet between 1801 and the 1850s. While astrology was at a relatively low ebb just then, and astrologers at that time apparently didn’t get around to putting Ceres in the horoscopes they cast, the collective consciousness of the Cerean Era--the period beginning roughly thirty years before Ceres was discovered, and ending about thirty years after its demotion--showed the same sort of influence by a distinct celestial factor that the history of the Plutonian Era shows so clearly.

A parallel process, though it never quite reached the intensity of the Cerean and Plutonian Eras, can be traced in the rise and fall of astronomical bodies that had a theoretical or notional reality among scientists or astrologers, but never quite managed to make it all the way into physical existence. The nonexistent planet Vulcan, between the orbit of Mercury and the Sun, and the mythical dark moon Lilith, orbiting the Earth out beyond the one moon we’ve actually got, both show the same kind of effects that preceded the discoveries of Ceres and Pluto, and followed their demotion. The difference was that the influences on collective consciousness represented by Vulcan and Lilith never quite managed to constellate themselves fully in the world of human experience. Vulcan had its day, attained the status of a planet for a few years, and then vanished when its existence was disproved. Lilith hovers like a phantom of the heavens, its existence accepted by a few astrologers today and rejected or ignored by everyone else. Both are still studied by some astrologers, but as we’ll see, they correspond to collective dreams of our species that never quite became real.

These examples from the past offer important guidance for the future. As we will see, the core nature of Pluto can be summed up straightforwardly as opposition to cosmos. The ancient Greek concept of cosmos--literally “that which is beautifully ordered”--lies at the heart not only of astrology but of most of the world’s traditions of spiritual philosophy and practice.

About the Author: John Michael Greer (pictured) is a writer, blogger, and independent scholar who has written more than 70 books, including The King in Orange, Circles of Power, and the award-winning New Encyclopedia of the Occult. A longtime student of astrology, he began working as a political astrologer in 2017. He lives in Rhode Island, US. https://www.ecosophia.net/

You can also view the book on Amazon.