Exhibition: Feminine Power: The Divine to the Demonic

In May the British Museum is putting on the first major exhibition to explore female spiritual beings in world belief and mythological traditions around the globe. I'm particularly excited about this because I was part of a community consultation panel asked to offer comments about some of the objects going on display. On the panel were other members and associates of the Children of Artemis as well. So, anyone going to this exhibition can be assured that pagans were consulted, as well as people from other spiritual paths.

The exhibition brings together ancient sculpture, sacred artifacts and contemporary art from six continents to explore the diverse ways in which femininity has been perceived. It explores the embodiment of feminine power in deities, goddesses, demons, saints and other spiritual beings, associated with areas of human experience from wisdom, passion and nature, to war, mercy and justice.

For the first time, the British Museum invited special guest contributors to respond to the themes in the exhibition, sharing their personal and professional viewpoints. The video and audio thought-pieces addressing each section will encourage discussion around the universal themes of the show. The contributions will conclude the exhibition alongside an area for visitors to share their responses as part of the conversation.

As well as community groups, guest contributors include: Dr Leyla Hussein, psychotherapist and award-winning international campaigner against violence against women who will reflect on Forces of Nature; Professor Mary Beard, classicist, author and broadcaster who will speak to Passion and Desire; award-winning writer and presenter of the podcast How To Fail, Elizabeth Day, who will explore Magic and Malice; former British Army Major and human rights lawyer, Rabia Siddique, who will share her thoughts on Justice and Defence; and Deborah Frances-White, the writer and comedian best known for her podcast The Guilty Feminist, who will explore the theme of Compassion and Salvation.

Objects from cultures across the globe displayed together include painted scrolls from Tibet, Roman sculpture, intricate personal amulets from Egypt, vibrant Japanese prints and Indian relief carvings alongside contemporary sculptures. The exhibition will include over 70 unique and spectacular objects, drawn from the British Museum’s collection complimented by loans.

The British Museum also revealed a newly acquired icon of the Hindu goddess Kali by Bengali artist, Kaushik Ghosh, the first contemporary 3D representation of Kali in the collection. As one of the most prominent and widely venerated goddesses in India, this devotional image of Kali reflects the living tradition of her worship, important for millions of Hindus around the world today. It was commissioned especially for the exhibition, together with the London Durgotsav Committee, which runs the annual Kali Puja festival in Camden, in Kali’s honour.

Loved and feared for her formidable power and aggression, Kali is the goddess of destruction and salvation, who transcends time and death, destroys ignorance and guides her followers to enlightenment. Although superficially terrifying, the bloodied heads she wears and carries represent her power to destroy the ego, setting her followers free from worldly concerns, and the belt of severed arms signifies that she liberates them from the cycle of death and rebirth, by the many weapons she wields.

Since the late first millennium AD, Lilith has been known within Jewish demonology as the first wife of Adam and the consort of Satan. Her origins are thought to lie in Mesopotamian demons. The exhibition will include a ceramic incantation bowl from 500-800 AD Iraq, featuring a rare early image of Lilith in female form. Buried upside down under the thresholds of houses these bowls were inscribed with charms to protect the named patrons from demonic forces and regularly name Lilith; sometimes as grammatically singular and feminine, but also masculine or plural.

In the nineteenth century, Lilith’s cultural relevance grew to embody defiance of patriarchal moral expectations. On loan from the Metropolitan Museum of Art in New York is the sculpture, Lilith (1994), by American artist Kiki Smith. Smith’s sculpture is cast from the body of a real woman, her piercing eyes of blue glass directly confront the viewer as she crouches on all fours against the wall, her anatomy hidden preventing a voyeuristic view of her body. This vision of Lilith is both defiant and unnerving, possessing an intangible quality, acknowledging her shifting identity through time. 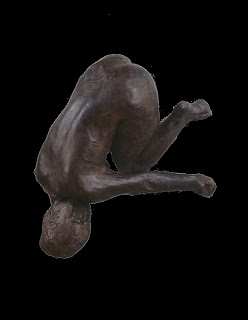 Kiki Smith said, "Lilith becomes this disembodied spirit that goes off and wreaks havoc and doesn’t want to be subjugated. Here she is transcending gravity and the constraints of her body."

Through material culture this exhibition explores how the representation of feminine power in world belief and mythology has played – and continues to play – an important role in shaping global cultural attitudes towards women and gender identity.

Belinda Crerar, British Museum curator, said, “This exhibition is a tour through history and around the world to see the different ways that female power and authority have been perceived in spiritual belief. The diversity of these goddesses, spirits, and in the past, gives us pause to reflect on how femininity – and indeed masculinity – enlightened beings and saints, and their profound influence in people’s lives today are defined and valued now and in the future.”

The Citi exhibition Feminine Power: The Divine to the Demonic runs from 19 May to 25 September in The Joseph Hotung Great Court Gallery at the British Museum. Tickets are available at an early bird rate of £12, with under 16s free and concessions and group rates available. You can find out more and book here: https://www.britishmuseum.org/exhibitions/feminine-power-divine-demonic

To coincide with the exhibition, an illustrated catalogue, Feminine Power: The Divine to the Demonic, written by Belinda Crerar, will be published by the British Museum Press in May.

This is awesome! And needed. Women are powerful creatures, so much so that the Christo-patriarchy will do anything to maintain their rule. If this were here in America, it would be taken down, defaced Andy picketed against.