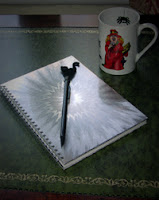 For me, 2007 has been a year of changing priorities and responsibilities. I gave up a full-time job in order to have more time to care for my mother, who is elderly and forgetful. I also returned to actively being a witch.

About 10 years ago I left a very active coven, intending to do a lot work on my own. But I didn't.

I did some magical work but not much. My mundane life got complicated and hectic; magic had to be fitted into precious spare moments and multitasking was essential.

Yet I think I learnt more from that than I realised at the time. I learnt that I can use the repetitive task of washing up to enter a meditative mental state and that I can silently celebrate the full moon in my head while staring out of a commuter train window.

OK, this is not high magic and I wouldn't consider myself to be a particularly good witch in cutting corners this way. But I believe that what I have come to think of as a bad witch's ways of working are still valid and can be surprisingly effective.

This year, in May, a friend who runs lovely workshops suggested I come along to the Beltane Bash in central London. I had a fantastic time and bumped into a few old friends from my former coven. They invited me to take part in a couple of rituals. The first was a beautiful and joyful handfasting at Avebury at midsummer; the second was an equally beautiful yet sad requiem for the coven's high priestess who died at Yule two years ago.

I realised I wanted to spend more time on the craft of being a witch so I started writing my blog. As I said in my first blog entry, back in early November, I consider myself to be a bad witch. I'm not a wicked witch. I don't curse people. I just have my own way of working that often cuts corners or mixes up the mundane and the magical and also breaks the odd taboo.
Posted by Badwitch at 09:39