The work of a witch's cat 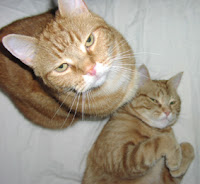 On Saturday, I was supposed to be doing some magic.

A lovely witch I know phoned me up a few days ago. She said that a few friends were thinking of doing some magical work based on the elements, and did I want to be part of it?

The idea was we would all do some personal work on each element in turn, starting with the element of earth. We would later get together to do a ritual combining our ideas.

We were due to start on Saturday and I decided to write a guided meditation. I had never written one before and I was a bit nervous.

Saturday proved to be very busy. I was out most of the day and got home to find the hot water system had broken. After dealing with an emergency plumber, all I felt I was fit for was going to the pub and then to bed.

But I think my cats knew I was shirking my witchly duties. At 4am one of them woke me up. I tried to grab him and throw him out of the bedroom, but he quickly disappeared under the bed. This happened repeatedly until, at 5.30am, I got the message.

It was dark outside and the wind and the rain were lashing at the window as I sat at my computer to start writing my meditation. I was the only one awake in the house - the cats having curled up in the warm bed I had recently vacated. At first I felt grumpy but soon I began to feel that this was the perfect time and place for my work. It was a magical, if eerie and isolated time. When I was about three-quarters of the way through my writing, I glanced up and saw the first red glow of dawn in the night sky.

I finished just before 8am. It was a grey, cold morning but the sun was up. I felt pleased with what I had done.

Then I went back to bed and slept soundly until brunchtime.


I need to re-read my meditation and probably revise it a bit but, when I am happy with it, I will post it here on my blog.
Posted by Badwitch at 18:11