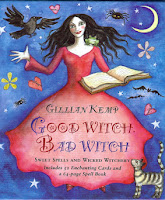 Seeing as I call myself The Bad Witch, I couldn't resist getting a copy of Gillian Kemp's Good Witch, Bad Witch: Sweet Spells and Wicked Witchery

The boxed set consists of a deck of 52 prettily illustrated cards - 26 showing good witches and 26 with bad witches - plus a book with interpretations of their meanings and an associated spell for each one.

The two types of cards represent the balance of opposites within nature - day and night, summer and winter, good times and bad times. This is something witches respect as they honour the seasons of the year and all aspects of life. We might prefer to only have happy days but we can't avoid every misfortune and there are valuable lessons to be learnt from the sad times of grief and hardship.

The cards can be used in a similar way to tarot cards, by laying them out in a spread and interpreting each in the light of the question asked and the cards that surround it.

I tried the cauldron spread of seven cards, which is described in the book. The cards show the past, present, attitudes, progress, opportunities, obstacles and outcome. I was a bit nervous in case all the cards were bad witches - I didn't want to find nothing but trouble ahead.

As it happened, a few were bad and the rest were good, but even the bad witches weren't really that horrid. The cauldron witch, for example, suggested that my plans and ambitions might be tested but I could overcome these obstacles. It also said healthy eating and avoiding toxins might help - something I agree with entirely but am not very good at doing.

The book also gives a spell for each card and one position in each reading suggests which card's spell you might want to try to help get the best outcome.

The first one I drew was the woods witch, with the interpretation that a project or desire would bear fruit. The associated spell involved writing my heart's desire on a length of ribbon and tying it to a tree. This is very much like the old tradition of tree dressing and of tying ribbons, sometimes with prayers, wishes or spells on them, to trees at sacred places. If you are going to do this, I would recommend using a tree in your own garden rather than littering a public spot.

Some of the spells associated with the bad witch cards could also be useful. I would imagine the spells to make someone return an object or to stop a toad keep asking you for a date might come in handy.

However, a few of the bad witch spells are curses and I would recommend being very wary about using them. Doing magic to give someone bad breath might seem like a harmless prank but it is unlikely to solve any problems and, particularly if they find out, could have unpleasant repercussions for you.