The power of the moon 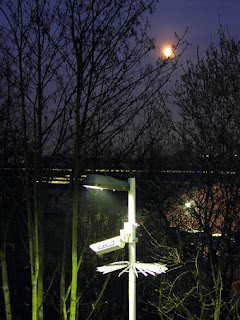 It was a beautiful misty twilight yesterday. I watched the sky turn from pale blue to deep Prussian, the full moon low and dominating the city skyline, as I travelled on the commuter train home.
It seemed to me it had taken on a reddish hue long ahead of the lunar eclipse that was due later last night. I stared out of the train window, mesmerised by its beauty. My fellow passengers no doubt gave me strange looks as I craned my head to keep the moon in my sight and, finally, got out my camera to try to capture it.

Photographing the moon from a moving train is not easy. I eventually took a picture of it from the bridge over the station where I alighted, but it doesn't do it justice.
I read in my horoscope that the lunar eclipse would inspire me to creativity. Perhaps it did. I am certainly now determined to get myself a new camera to better capture scenes that awe me with their beauty.

With work again the next day, I didn't feel I could stay up until 3.26am to see the full lunar eclipse, but I did set my alarm clock. The sky was cloudy by then and I couldn't see the eclipse at all, but the night did feel strange and magical. I lay awake for quite a while, remembering things that had long ago passed and feelings that were buried deep. Perhaps that was the power of the eclipse, or perhaps just the kind of thing one thinks about in the dark time before dawn.
Posted by Badwitch at 08:01