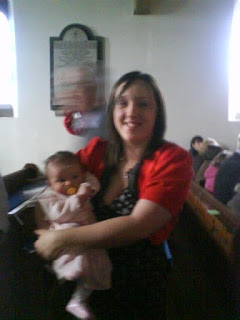 The photograph to the right was taken by a friend's niece on her mobile phone on Mothers' Day at the baptism of her friend's baby - the main subject of the picture.

What is interesting is the background. There appears to be the blurred image of a the head and shoulder of a man wearing glasses between the camera lens and the plaque on the church wall. Is it a ghost? Is it a reflection? Is it caused by some fault on the camera?

My friend has no idea. He said:

"My first thought was that it was a reflection on the plaque, but it is too large and seems to partially obscure the wreath below.

Apart from downloading it from my phone to my computer and uploading to Photobucket, all I have done is rotate the picture 90 degrees.

I am informed that there was no one behind the woman and baby when the picture was taken."

After my friend posted the picture on the internet, he got a few suggestions as to what it might be.

"I believe in spiritualism - my parents were spiritualists. I am very sceptical about a lot of the hokum some of them spout but... when spirit wants you to know something they show you."

Someone else gave a more scientific explanation:

"It's a digital 'ghost'. They happen sometimes. Basically it's another image that the phone has captured at some point and has been partially stored in the memory. When it took the photo the camera got confused and combined the two images into one when it stored the photo. It's rare but not unheard of."

A similar suggestion was:

"It appears to be a man in a gray shirt and white dog collar as sometimes worn by CofE vicars and the trendier Catholic priests. I think that it is likely that he walked past as the photo was being lined up and the camera phone (being essentially a video camera that takes stills) recorded several frames of the priest in its temporary memory and, due to a glitch, combined those with the actual picture."

What do you think? Might the image be a ghostly visitor or is it just a trick of the camera?