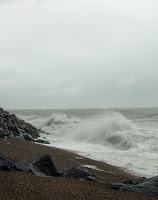 I was woken at 4am by the storm howling in the darkness.

I went to my balcony window and lifted the blinds. It was pitch black outside and I could only imagine what was happening out there, so I went back to bed and lay listening to the sounds of the wind, the rain and the crashing waves.

Although my apartment was right on the coast, I know I was lucky. I was in Sussex, on the southern English coast, which didn't experience nearly such bad weather as Devon and Cornwall, where there were seven flood warnings in place and winds of around 80mph.

By 8am this morning the worst of the storm had subsided but I still had to fight against the wind when I ventured down to the beach.

I love the raw elemental force of a storm, especially a storm at sea. Although it can be immensely destructive, it is also awe inspiring in its power.

Today's storm came at the same time as the spring high tide, meaning the risk of flood was severe. It is, of course, a tragedy when lives and homes are lost in this way, but a storm can also sweep away dead wood - things which are ready to go - and make way for something new to grow.

Perhaps that kind of change was in the air. When I returned to London I got a phone call from a lovely friend who told me that she had decided to give up running a group that I belong to because she is expecting a baby. I think she made the right decision, although I expect it was a hard choice to make.
Posted by Badwitch at 16:07