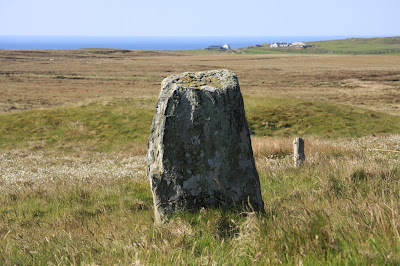 Cultoon Stone Circle is the only one of its kind on the Isle of Islay. It isn't well signposted. It also isn't finished. Three stones are standing, the rest lie on their sides. An archaeological excavation in the 1970s discovered ancient sockets in the ground close to the stones, but they were never put in place. No one knows the reason this stone circle was never completed.

The stone circle lies in a north-east to south-west ellipse with its long axis in line with Slieve Snaght in Donegal and indicating where the sun would have set in midwinter at around 1800BC. It would have been an accurate astronomical observatory for its time.

Now, close to midsummer, the stone circle is in a beautiful field full of wild flowers, with green hills on one side and the azure sea on the other. In winter I expect it would be windswept and cold, but still a lovely setting.

A friend who visited the circle with me noticed that it seems to be made up of different types of stone, with colours from dark to light, some pinkish, some bluish, some covered in lichen and some quite bare.

Sitting quietly and trying to sense the energy of the circle failed to give me any clue as to its original purpose. Seeing as it is incomplete, it is possible it was never used in ancient times. Nevertheless, I felt a tingle when lightly touching the stones that were standing and I believe this would be a beautiful place for a ritual to mark midwinter's day.
Posted by Badwitch at 08:00

I think this answers my question/comment from the previous entry ;-)

I always feel a bit of tingle just reading about how people would built and create these circles or structures to mark the times of the year. It was obviously significant for them, and this makes me want to explore this further for myself.

There is certainly so much still to discover about why our ancient ancestors built these structures.