The first rose of summer 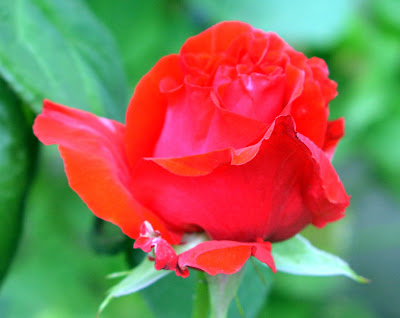 The first rose of the year has flowered in my garden. It is a lovely rich red and although it might not be perfect enough for the Chelsea Flower Show, which is on this week, it is good enough for me.

Roses are so steeped in symbolism and folklore that I felt sure summer's first bloom must have significance. However, searching the web mainly showed me song titles and a line from the traditional Tollerton Plough Play: The Plough Boys in which a recruiting sergeant tries to persuade a young man to ditch his girlfriend and join the army because:

"Her beauty it will fade away / Like the first rose of summer the winter doth
become."

Despite this gloomy couplet, roses have long been associated with romance and love. The ancient Greeks and Romans would give roses as a tribute to the goddess of love, Aphrodite or Venus.

In The Language of Flowers, which originated in Persia in the 15th century and was brought to Europe in the 18th century, roses featured prominently. Red roses stand for desire, passion and romance, with each shade signifying a slight variance on the theme. Peach roses mean friendship, pink roses show gratitude, yellow roses are for joy, white roses represent secrecy or innocence, black roses mean death or the parting of ways.

Yet, through history, roses have meant far more than just an appropriate gift for a friend or lover.

In early Christianity, a five-petalled rose symbolised Christ's wounds. For alchemists, the red and white roses represent masculine and feminine. The English War of the Roses was a fight for the throne between the house of Lancaster, whose symbol was a red rose, and the house of York, represented by a white rose.

Yet none of this has helped me find traditions or folklore surrounding summer's first rose. Perhaps it doesn't matter and what is important is that a beautiful red rose has bloomed for me at the time of May's full moon, bringing promises of passion, romance and excitement in the season of long sunny days and balmy nights.

If you know anything more about the significance of roses, and first blooms in particular, leave a comment on my blog.