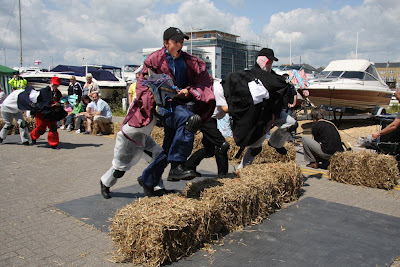 I have been attempting to write a guided visualisation on the element of fire to do at midsummer, June 21.

If you have been reading A Bad Witch's Blog for a while you'll know that I decided to write guided visualisations for each element - earth, air, fire and water - over the year, starting at the midwinter solstice.

For some reason, I have been finding each one progressively more difficult to write.

I wrote my earth meditation late one night last December. It took time, but I didn't really struggle with it. Maybe that was because, astrologically, I am an earth sign.

The air meditation, which I wrote before the spring equinox, took me longer. I came up with an early version quite easily, long before the date I wanted to work through it, but was unsatisfied with it. While soaking in a bath one Sunday morning, I suddenly got inspiration, rewrote it, and was happy with the result. Although I was, perhaps, immersed in the wrong element at the time - water rather than air - the final meditation was all about getting sudden inspiration.

But I have been struggling hard to write my fire meditation. I forced myself to write a first version, knowing that I could always rewrite it later. I went over it several times, without feeling happy with it - until I decided to take my mind off my work altogether and have a day off.

Shopping, a movie and going to watch a bizarre pantomime horse championship -run in aid of charity - was just what I needed. I realised that the very things my meditation were lacking were the things I was lacking too - energy and passion about the project. A day off was what I needed to recharge my batteries. I've now finished writing my fire meditation and I hope it runs better than a pantomime horse when I try it out on June 21!