Crossroads of the elements 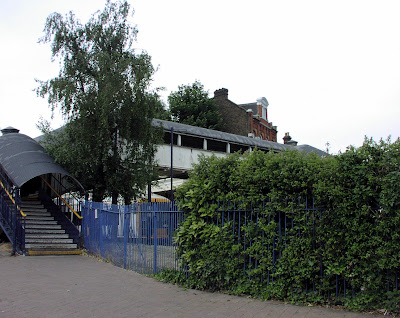 That rather dull looking scene of a suburban railway station near where I live is, in fact, a crossroads of the elements.

Water, in the form of a culverted stream, runs underneath the railway, the road and the rails represent earth, the bridge is air and fire powers the trains that run along it – well, electricity these days, but I do recall watching a few steam trains chuff their way through the station in my childhood.

Crossroads are enchanted places where different world’s might converge, as well as different roads. They are places where, in folklore, one might meet faery folk, vampires, wandering spirits or even the odd witch...

They are places where choices are made and the future is therefore not certain. They are a good place to do magic – although I realise you wouldn’t want to engage in some elaborate ritual on the bridge over the railway at rush hour.

And sometimes magic seems to break through even that dull little suburban crossway. The stream sometimes breaches the culvert and springs of water bubble up into the street. In spring, that hedge is always laden with blossom and it autumn it is rich with red berries. In both those seasons it is full of birds – nesting or feeding – and you can hear birdsong from right down the street. At times like those I can feel wild nature trying to break through, and the crossroads does seem magical.