The mystery of the Long Man of Wilmington 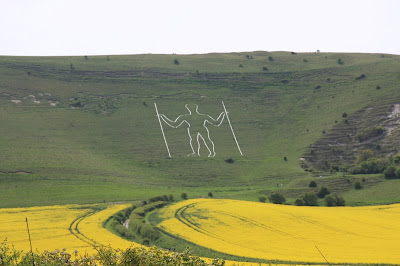 The sun seems to have put his hat on and come out to play for the past couple of days, so what could be better than a trip into the Sussex countryside for some sightseeing?

Well, I would say what is better is if you add some mystery to the outing.

The Long Man of Wilmington, a giant chalk figure of a man cut into side of the South Downs, is certainly a sight worth seeing. He is also a puzzle. No one knows how old he is, why he was put there, by who, or what he represents.

The earliest drawing in which he appears was made by a surveyor called John Rowley in 1710, but no one has been able to tell if the figure was first cut in the cliff only a few decades before then or if it dates back to pre-Christian times.

Up until the late 19th century, the figure was barely visible, but in 1874 a public subscription through The Times paid to have it restored. Further restoration work took place in 1969.

Some early accounts describe him as holding a scythe, some say he holds two spears, and a third idea is that he is standing in an open doorway. However, it is possible that some of the original lines were so badly obscured that the image we see now is nothing like the original image.

Pagans like to think of him as a representation of a nature deity, a fertility symbol or perhaps the guardian at the threshold of a fairy mound. He is a popular site for outdoor rituals, particularly in the warm weather.

Why not pay a visit for yourself and see if you can pick up any clues to try to solve the mystery?

The chalk man is in beautiful countryside with some lovely old villages and great pubs nearby, so it makes a perfect summers day out for a witch and her friends.

I've always been intrigued by things like this. So glad it's been preserved. Although we may not know exactly what its purpose was, we do get the joy of wondering.