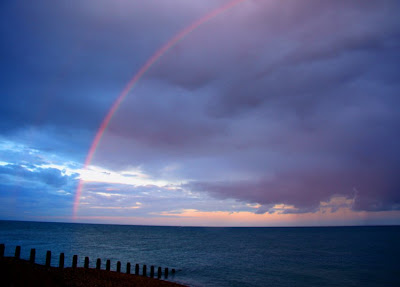 A rainbow is a lovely sight after a summer storm. It makes people want to stop what they are doing to enjoy a moment of beauty and is like a message in the heavens that bad times, whatever they are, will end.

In fairy tales, a pot of gold lies at the foot of the rainbow, it is yours if you can get there before it vanishes. You would have needed a fast boat to try reach the one in the photo above, but even then would probably have failed because a rainbow always seems to recede away from you as you approach it.

The rainbow in Greek mythology is a path between heaven and earth created by the messenger goddess Iris. In Hindu mythology the rainbow is called the Indradhanush, the bow of Lord Indra, the god of thunder and lightning. In Norse mythology, the Bifrost Bridge is a rainbow that connects Asgard, the realm of the gods, with Midgard, the human world.

For Christians, the rainbow is a symbol of god's peace with man because, in the Bible, the Christian god sent a rainbow as a symbol of his agreement with Noah after the flood.

For the Chinese, the rainbow was believed to be a slit in the sky that was sealed by the goddess Nuwa using coloured stones.

The colours of the rainbow are red, orange, yellow, green, blue, indigo and violet. They appear because light is refracted in raindrops and reflected back to the observer. The sun must be behind you and it must be raining in front of you to see the effect.

Red, orange, yellow, green, blue, indigo and violet are the colours that make up white light but each colour bends at a slightly different angle because it has a different wavelength. Red has the longest wavelength and violet the shortest.

Chakra colours are similar to rainbow colours:
Red: Root chakra at the base of spine
Orange: Sacral chakra in the lower abdomen
Yellow: Solar plexus chakra below the chest
Green: Heart chakra in the middle of the chest
Blue: Throat chakra
Indigo: Brow chakra in centre of forehead
Violet: Crown chakra at the top of the head

In colour therapy, these same colours represent different aspects of our lives and personalities. The basic idea is that we can give ourselves a boost by choosing a colour that complements our mood.

Whether you believe a rainbow has spiritual significance or not, seeing one is bound to bring a smile to your face and the faces of everyone around you. Enjoy the moment!