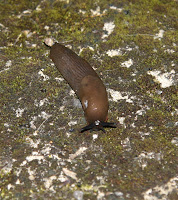 Several showers of rain over the past week must have washed away my ward against slugs because the other night I once again found one in my kitchen.

As before, I evicted him to the garden. Then, I redrew a salt circle of protection around my house as had proved effective in keeping the creatures out until it washed away. But I also decided that more drastic action was required.

Slugs love beer and a good way to keep down the slug population in your garden is to provide saucers of it for them. The idea is that they are attracted to it, get drunk, fall in and drown. I did wonder briefly whether encouraging slugs to drink themselves to death is in breach of the Wiccan rede, to harm none, but I decided that, hopefully the law of three-fold return would simply bring me lots of beer.

So, last night I opened a can of Guinness and poured it into several saucers which I then placed further down my garden than the salt circle.

A couple of hours later I popped out to see if it was having any effect. Well, it was. Two large slugs were happily guzzling the beer and another was heading down the garden path towards the saucer just as quickly as he could slither (see the picture above).

The next morning went out again to see if I had caught any slugs or if they had just had a wild beer-swilling party before rolling home to the flowerbed.

It was a question I was sadly unable to find the answer to because the saucer was by that time right down the end of the garden at the entrance to the foxes' den. Perhaps the foxes had decided beer-marinated slugs was the dish of the day, or perhaps they had just joined the slugs for a drinking session. The only way I could tell would be to repeat the operation and sit up all night watching from a window, but I don't think I will.

In folklore, I discovered, slugs were once considered a cure for warts. The Pitt Rivers Museum contains a cabinet dedicated to sympathetic magic. Inside it, an old spell, written on the side of a glass jar containing a pickled slug impaled on a thorn, says:

Charm for Warts, Oxfordshire. Go out alone & find a large black slug. Secretly rub the underside on the warts and impale the slug on the thorn. As the slug dies the warts will go.

Luckily, I can't imagine any modern witch trying any spell so unpleasant, especially when a dab of tea tree oil can treat a wart better than a slimy slug!

Note: Some people can have a reaction to tea tree oil. Always seek expert advice before trying complementary remedies.

Sounds like an ideal solution to your slug problem.With any luck word will get round that there's free beer
and who knows what 'gate crashers' will appear!(Hick-up. burp,pardon me).