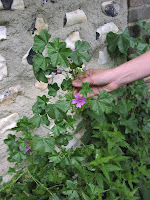 Did you know that marshmallows - the sugary sweets that taste so artificial but are wonderful melted on hot chocolate - were originally made from the marsh mallow plant? The roots were boiled and mixed with sugar to create fluffy confections without the use of egg white or gelatin, so the sweets would have been vegan-friendly.

The picture (right) shows a relative of the marsh mallow, the common mallow, which I photographed on the herb walk last weekend.

Both varieties of mallow have been used traditionally to treat coughs and sore throats, as they help produce mucus and are also soothing. However, the common mallow is also a laxative, which may not give you quite the effect you want if you only want to treat your throat.

In folklore, apparently some Celtic tribes placed flat seed disks from mallow plants over the eyes of dead bodies, believing they would prevent evil spirits from entering.

I could do with some mallow for my sore throat right now :-(. Do you know any other natural remedies? Perhaps easier ones to find in the garden than mallow?

Lemon and honey is the most common home remedy for a sore throat. Sage is also sometimes used. All these things can often be found in kitchens.

However, I should point out that I am not a qualified herbalist or pharmacist, so I can only offer general information, not medical advice. You should always consult a qualified medical herbalist before taking any herbal remedy and consult your GP if your symptoms are severe or persist.